When your neighbours start building...

The following is a typical enquiry letter to CBRRA and its reply, which will give you an idea as to where you stand in a situation such as this:


A typical letter from a resident:–

“I do not know if you are aware of it, but, some time ago, the property on Erf. XXXX in XXXXXXXXX Road was sold and subsequently the new owner has demolished the entire existing house, excavated almost the entire site down to a depth of some 3 to 4 meters below the average road level and is now building a new building there.

As no one in our area, to the best of my knowledge, has ever been approached nor informed, I would like to know if you are aware of what building is to be erected, for what purpose and to what height, width and depth, before it gets out of hand and why no one has ever informed me about it.

It may all be OK and in accordance with the Council zoning scheme and title deed restrictions, but I for one am concerned and afraid that something may get out of hand before it is too late to do something about this possibly illegal construction going too far before it can be stopped.

It would be appreciated if you could enlighten me on this issue”. 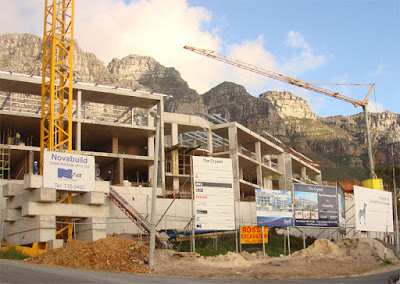 “Thank you for your enquiry in respect of the new building being constructed on Erf XXXX next to your property.

CBRRA’s response thereto is as follows :

If a person has submitted a plan for the construction of a building on his / her property and the Council considers that it conforms entirely with the title deed and the zoning scheme, the Council will pass it with no legal obligation on its part to refer the plan to any third party for their opinion or permission to do so.

However, should, in submitting the plan for approval, the applicant have to apply in addition for the removal of or modifications to restrictions in the title deed and / or zoning scheme, which would prevent the Council from passing the plan until it has received the response of CBRRA and the owners of the surrounding affected properties, the whole advertised public participation process must be initiated and concluded before the Council can approve the application. This can sometimes take up to two years if there are objections.

If you now have a building nearby you on Erf XXXX which is being built and you have not had any opportunity to comment on it, obviously the Council was of the opinion that the planning application in respect of the new buildings conforms in all respects to all the relevant regulations and has already passed the plan

Unfortunately, CBRRA’s experience with the Council is that it is not always correct in its adjudication of applications and has, on occasions, incorrectly passed an application when, in fact, it should have referred it to the public and CBRRA for comments before its approval.

You do not say in your letter whether you think the proposed works on Erf XXXX are illegal or not. CBRRA has not been informed of what is going to be built on this erf, so it can only assume that the Council has passed the original plans, without advertising them for comment by the public, because it considered that they conformed entirely with the relevant regulations.

In an instance such as this, CBRRA is here to assist residents and ratepayers in their dealings with the Council. Please , therefore telephone the Building Inspector, Steve Wilkinson, on 021 400 1111 on weekdays before 10 am and ask him on your and CBRRA’s behalf to check whether
(1) plans have been passed for the works on the property?
(2) whether they needed departures or amendments to or deletions from the title deed and the zoning scheme ? (3) if so, when were these advertised for the public’s approval?
(4) is the building being built according to the passed plans? and
(5) can he meet you and CBRRA on the site to show us what is being built? Alternatively, can you and CBRRA come into his office to inspect the plans and have them explained to us ?

If deep excavations have been or are being executed up to the boundaries between Erf XXXX and adjacent erven, you must ascertain from the Council what measures have been taken by the Owner to prevent the collapse of the excavated faces, which, if they do collapse, will cause extensive damage to nearby buildings on the adjacent erven. Whatever the response, report the situation to the insurers of your house.

After you have done all the above, please contact CBRRA again and it will attend any meetings you have arranged and assist you and advise you further”.


What the above is demonstrating is that CBRRA acts as a support for residents in their dealings with the authorities and reinforces their efforts to obtain clarity on issues such as this.

In essence, residents are encouraged to instigate the enquiry in respect of their concerns with the authority and CBRRA will subsequently assist them to obtain a proper response should they not be successful in their attempts to receive a satisfactory answer.

For assistance and guidance in matters such as the above, contact CBRRA on campsbayratepayers@gmail.com.