Some years ago, the City of Cape Town historically comprised over twenty-five separate municipalities which had been assembled over the last century or so. These were first reduced to eight municipalities and subsequently to one single Unicity, which has a series of sub-councils which replaced the previous multiplicity of municipalities.

Each one of these previous municipalities had their own by-laws, notably planning zoning schemes, which differed considerably from each other and were a nightmare for Owners and Developers, who needed to find out in terms of which scheme they were obliged to design their buildings.

At the same time, the City also inherited a large amount of existing planning policies for local areas, some in existence and some still in an embryonic stage. The City is going to update and publish these local plans in due course but is concentrating at present on the overall holistic SDF, in terms of which the local plans will see the light of day some time in the future after further negotiations with the residents of the local areas.

Because Camps Bay and environs has not engaged with the City on a local plan, it will have to apply to do so some time in the future should it so wish.

Over the last eight years or so, the City has been unifying all these planning zoning schemes into one integrated zoning scheme, which is not far off now from being brought into law (probably in 2010).

At the same time, the City Planning Department has been working in terms of its overall planning policy for the whole of Cape Town in terms of the previous MSDF (Metropolitan Spatial Development Framework), which has now become outdated and in need of modernizing in terms of the City’s new planning integrated zoning scheme and its unified Unicity Planning Policy now to be called the SDF (Spatial Development Framework), which is currently out for public comment and participation for issue in 2010 /11 after a further public participation exercise in respect of its final draft in 2010. 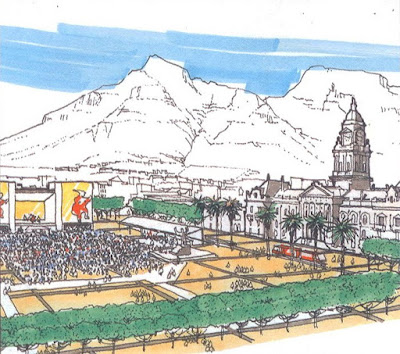 For further information look up futurecapetown@capetown.gov.za

You can download the draft SDF documents from www.capetown.gov.za/en/sdf

The City has recently published the following press release for the benefit of the public at large in all sectors of the Unicity : 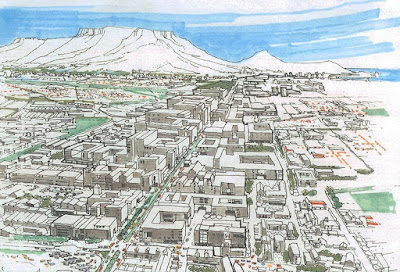 The land area of Cape Town has almost doubled in size since the mid-1980s. In addition, the number of people in Cape Town is growing; in the next 15 years the city’s population – already at 3.2 million – could reach 4.2 million people.

It is vital that economic growth continues, and that it does so in a way that creates and sustains jobs. But this same vital growth means increased, and ongoing, demand for land, water, transport and energy resources. It also means pressure on Cape Town’s already threatened indigenous plants and animals. Already the city is experiencing the effects of growth. Roads
are congested, landfill sites are filling up, and the coastal water and air are polluted…

These changes affect the quality of life of everyone who lives here, and threaten many people’s livelihoods. Add to this the fact that the Western Cape will probably be more affected by climate change than anywhere else in South Africa, and it is clear that the City needs to get better at
planning for the future.

This is what Planning for Future Cape Town is all about.

In the early 1990s, what was then the Cape Metropolitan Council (CMC) prepared a Metropolitan Spatial Development Framework (MSDF), which was approved by Council in 1999. Since then, development trends (and legal requirements) have changed in Cape Town. The City’s Spatial Planning and Urban Design Department is therefore preparing an updated SDF (using the original MSDF recommendations, and its ongoing reviews, as a starting point) as well as individual SDFs for each of the City’s eight planning districts.

What should a Spatial Development Framework (SDF) do?

An SDF informs investors where development opportunities exist in the short and longer term. It will offer predictability, as once it has been approved it will be the basis on which City officials decide on new development proposals.

How do you imagine the future of Cape Town?

Over the next four months or so, the City will hold community meetings in each of the 23 subouncils, as well as city-wide stakeholder meetings, to find out how people in Cape Town imagine the future of our city.

Some examples of the questions that need answering are:

• How do you think the city should grow? Upwards? Outwards? Not at all?
• What are the most important things on which government should be spending public (ie, your!) money?
• Do you think it is worth preserving fynbos rather than building houses on it? And if so, where should new houses be built instead?
• How should we connect Capetonians with each other, and with economic opportunities? Through better public, or private, transport?
• Should people be able to live closer to work opportunities?

The City will also ask provincial and national government, town planners, community and environmental groups, developers and architects for their advice and consider the Western Cape Provincial Spatial Development Framework.

With all of these inputs, the team will prepare a draft SDF for each of the City’s eight planning districts, as well as for the whole city. We will then ask for your final input and comments, before submitting the plans to the Western Cape Government for approval. Eventually these plans will replace many of the old plans that still guide development in Cape Town.

• To see a map of the eight planning districts, visit your subcouncil office or www.capetown.gov.za/sdfeight.
• For more information about the stakeholder participation process,
contact Eleanor Sonnenberg on 021 531 9787, e-mail eleanor.sonnenberg@gmail.com.
• If you have questions about this project, please e-mail
futurecapetown@capetown.gov.za