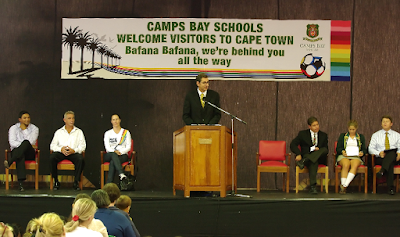 CBRRA joined fellow community leaders and members of Camps Bay on Friday, 30 April 2010 for the launch of the Camps Bay Schools' 2010 FIFA World Cup™ Support Initiative. The schools aim to collect funds for the African Brothers Football Academy through a competition to run at the three schools during the month of May.

Amongst the guests were FIFA ambassadors, founders of the African Brothers Football Academy and Lianne Burton, Marketing Director for Cape Tourism. Banners displaying the schools' support to visitors and Bafana Bafana were unveiled at the three schools.

Cape Argus photographer, Andrew Ingram, took pictures from a helicopter of pupils gathered on the sports field forming the shape of a soccer player who kicks a ball with the letters 2010 on the side. The event was closed off with a soccer match between CBHS 1st XI against an Old Boys team. CBHS 1st XI won 2-0.