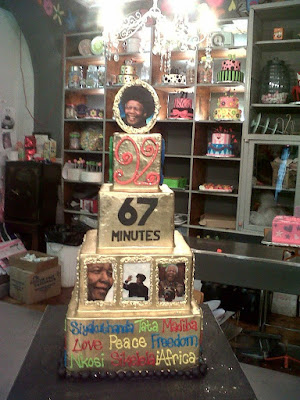 Cape Town has a super fun bakery that pulls out all the stops to make a special person’s birthday a special one, the creativity of Charly’s Bakery knowing no bounds. Strictly speaking, Charly’s Bakery should be called Jacqui’s Bakery, as it is Jacqui Biess who is the energetic and creative powerhouse running Charly’s Bakery with her three daughters Alex, Daniella and Roche.
In honour of Nelson Mandela’s birthday on Sunday, Jacqui has been infected by the spirit of unity and goodwill amongst South Africans resulting from the World Cup, and is calling on Capetonians to join her, her family, staff and friends in walking the Madiba Unity Fan Walk on Madiba’s special 92nd birthday. At the end of the Walk, Charly’s Bakery will share a special 4-tiered Golden Wicked chocolate birthday cake with the walkers, serving at least 300, and singing Happy Birthday to Mandela.
Says Jacqui: “Our Tata has shown us what it means to be free and to be able to live without fear of being who you are. He did it for 67 years, we can do it for 67 minutes”.
The planned route starts off at 12h00 on Sunday at St George’s Cathedral, moves along St George’s Mall, and links up with the bridge which crosses over Buitengracht Street, onto the Prestwich Memorial precinct at St Andrews Church (at Truth Coffees). The Fan Walk will link in with the Ubuntu Festival, which takes place this weekend. DJ’s and live musicians such as Hot Water, The Gugulethu Tenors, Coda, Sterling EQ, and Mthika will peform along the route. There will be a strong CCID presence in the city.