The incidence of Graffiti in the City has increased exponentially in recent years and continues to grow. Graffiti can cause unsightliness of property and the undeterred spread thereof signals that no one cares and therefore actually invites further disorder and ultimately crime.

Although the spread of Graffiti is to some extent being successfully combated in the City centre for instance, it is becoming increasingly visible in the bigger metropolitan area. Current efforts include those by various City Directorates to remove Graffiti from their own assets as well as City Improvement Districts (CID's) taking it upon themselves to remove Graffiti.

These efforts do, however, not include law enforcement action and do therefore not keep pace with the wider spread of Graffiti. This perceived inaction creates the impression that the offences of Graffiti vandals are being tolerated.

The Safety & Security Portfolio Committee accordingly requested that an appropriate By-Law be drafted and that a Graffiti Control Strategy be developed. Extensive research was done on how other cities around the world deal with Graffiti and the Draft By-Law therefore reflects international best practice.

It is important to note that the Safety & Security Directorate is mindful of the fact that not all forms of Graffiti are destructive in nature and that mural art can in fact contribute to the beautification of an area. The Draft By-Law therefore provides adequately for those practising such art forms.

The Draft By-Law has been finalized, scrutinized by the City's legal department and is now subjected to the prescribed Public Participation Process which spans from 20 July to 8 September 2009. 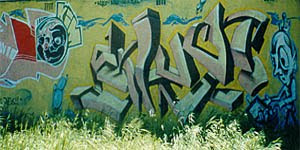 The process includes invitation for public comment placed in corporate and community newspapers, publishing the draft on the City's internet website, having copies available for viewing at all libararies and Sub Council offices, sending individual invitations to identified interest groups for comment and arranging for the matter to serve before all Sub Councils.

It is accordingly proposed that the Sub Council contributes to the public participation process by inviting public comment and arranging for any comments and concerns on the draft by-law to be submitted as required.

Please download the Draft Graffiti By-Law ‹‹here›› and submit your comments in writing by fax or e-mail to Anton Visser on 021 400 5923 or anton.visser@capetown.gov.za before 8 September 2009.