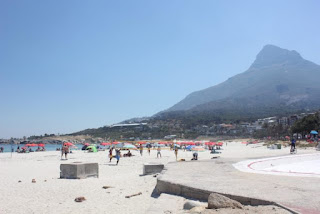 
The issue of homelessness and street people was among the items on the agenda of the Ward 54 committee’s last meeting for the year.
The committee met on Thursday November 1 at the Green Point Athletic Stadium. The ward includes Sea Point, Fresnaye, Bantry Bay, Robben Island, Signal Hill, Camps Bay, Bakoven and Clifton.
Chairperson of the Camps Bay Community Police Forum (CPF), Bernard Schafer, raised concern about the number of street children on the beachfront. He said there have been attempted robberies at the beachfront in the evenings.
Mr Schafer also spoke about the lack of facilities at Bakoven beach.
“People are starting to flood in and the problem is that there are no toilets there and they relieve themselves in between rocks,” he said.
Representing Camps Bay businesses, David Raad, said lighting was another major issue on Camps Bay’s beaches. He said law enforcement on the beach was needed.
“Street kids are harassing people there, particularly the tourists and this is not good for tourism in this city,” he said.
In Sea Point, Seafront for All’s Lorna Levy said homelessness was getting out of hand in the area. She said regulars were now starting to put up structures.
Chief Operations Officer of the Sea Point CID, Heather Tager, touched on the traffic problems in Sea Point.
“It’s chaotic and becoming worse every day and it’s not just the taxi drivers, private drivers are also a problem. People are now driving through red robots in Sea Point,” she said.
Ms Tager said big trucks were causing traffic chaos on Clarens Road. She also raised concerns about residents who were not reporting crime to the police.
She said Law Enforcement officers needed to be given more power. “We had a recent armed robbery in the area and our law enforcement chased the criminals and caught them in Heideveld,” she said.
Camps Bay Ratepayers’ Association’s vice-chairperson Richard Bendel proposed a paid parking lot along Victoria Road to minimise the number of car guards.
Ms Levy also complained about the dog poo left on the beach.
“There are dispensed doggy-poo bags but still dog owners don’t pick up after their dogs,” she said.
Ward councillor Shayne Ramsay said she would lobby for more funding for Law Enforcement in the ward.
She said a Clifton and Camps Bay City Improvement District (CID) was needed.