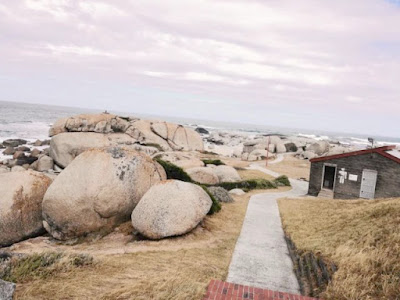 Sub-council 16 has unanimously rejected an application to host a five-day concert at Maiden’s Cove next month.
The applicant, SP Events CC, applied in January this year to the City’s recreation and parks department for the use of the public open space from December 27 to December 31.
It was heard that the applicant’s representative, Mark Abrahams, visited the booking office and insisted that the clerk issue SP Events with an invoice and prescribed certain conditions to be included in the invoice.
Sub-council heard that one of the conditions entailed that they could apply for a liquor licence.
Last year, SP Events held a similar event in this space.
Sub-council heard that one of the conditions of the permit for hosting the event was that they had to remove the infrastructure used by 6am on January 1 but they had failed to do so on time which caused a safety hazard for the public visiting the beach on New Year’s Day.
The booking was cancelled by the office as it was not in accordance with the established practice. This resulted in a dispute between the parties, internal appeals and the matter going to the High Court.
The City’s recreation and parks departmentmaintainedthat although the company had hosted similar events in the park on the public space, it did not support the event as it was held over the peak period of the festive season.
They said the event would deprive the broader community of the use and enjoyment of the public open space during this period.
They said Maiden’s Cove was one of the city’s most popular public open spaces and they wanted to ensure that it was open to all.
A letter from SP Events attorney Jan Hilderbrand to sub-council, stated that SP Events had previously submitted applications to the City’s Recreation and Parks department and procedures which had to be followed have always been the same and they complied with the City’s by-laws.
On the point of Maiden’s Cove being only limited to a select few, Mr Hilderbrand stated that the City was being inconsistent as they had showed an intention to privatise Maiden’s Cove, which had been met with outrage in various communities.
They argued that the failure to remove the infrastructure on time was an isolated incident and based on circumstances out of SP Events’ control.
After a short private discussion between the members of the sub-council, the matter was turned down by the full house.
Ward 54 councillor Shayne Ramsay said she had discussed this with ratepayers and residents in the area and there was a strong objection from all sides. She said residents were concerned about the traffic and crowd control issues.
Ward 77 councillor Brandon Golding said Camps Bay and Clifton were the busiest beaches during the festive season.
“Maiden’s Cove has a history of people from all over visiting on these dates. The timing is wrong, we can’t afford a private event during this time.”
Sharing his sentiments, Ward 115 councillor, Dave Bryant, said the matter was not in the public interest.
Touching on the sub-council’s decision, Mr Abrahams said he had been in the events industry for over 18 years and did not believe the City had acted in good faith by changing the process which had been applied consistently in previous years.
He said the event created work for over 700 people over the New Year season and attracted a diverse crowd.
“Events of this nature are conducive to steady economic growth and tourism in the City which the City is reliant on especially during these tough economic times.
“I believe that the City has erred in its decision since the eventis exactly the sort of positive campaign that the City should align itself with.”
He said he had experienced resistance from the City and felt he had been targeted.
He told the Atlantic Sun he would appeal the sub-council’s decision.