At the Manco meeting held on 13 September at the Bay Hotel in Camps Bay, a new chair, two vice chairs and the following portfolios heads were selected for the year 2010-2011. CBRRA wants to thank these members for their efforts, time and passion that is so generously offered to the community. There is a desperate need for a new Minutes Secretary and a Membership Portfolio head. If anyone is interested in these positions, please contact John Powell on 27 21 438 8287 urgently.

Ms Walters, the Director for Planning and Building Development Management for the City, takes your readers through the rather tortuous manner in which illegal building operations have to be dealt with by the City, in terms of the Land Use Planning Ordinance and their own operational methods. One must wonder why no improvement to this system has been made to date but, until such time as the largest City in the Province actually does so, its citizens must accept the law as it stands.

However, Ms Walters ignores the real problem that all ratepayer groups complain of in this regard: The City almost systematically fails to curb illegal building work and then when such work is brought to their attention by the community, the Planning Department (PD) invariably support whatever departures and consents that are required to retrospectively legitimise the building.

The well-publicised Bantry Bay development on Beach Road is just such a case, This development, despite having deviated substantially from the original, approved plans and having attracted cease work orders, had its "rider" plans supported for approval by the PD to the Good Hope Subcouncil ! Thankfully, the committee of Cllr Taki Amira stood firm and rejected the application. CBRRA is greatly encouraged by the brave stand taken by the politicians.

The Crystal block in Woodford Ave, Camps Bay tells a similar tale. The developer deliberately deviated from the levels of the basement depicted on the approved plans.When CBRRA complained of this, the City requested amended plans but allowed the building work to the upper floors to continue, contending that these floors were as per the approved plans. However they couldn't explain how those floors would stand up if the basement was rejected.
Of course, the City had no intention of rejecting the amended basement plans and even though, in the end, it did take a year of fiddling with the plans (ie working without plans), the "rider" plans were passed - irregularly in the opinion of the CBRRA and its legal team. The only ray of hope emanating from this flagrant disregard for the community, is that the Mayor and Speaker of the City are considering the appointment of an independent investigation into the approval process. This follows strong representations from CBRRA. However, it is small comfort for those who live in the shadow of this massive block which is now being occupied by new owners and tenants.

It would be wise for Ms Walters to accept that developers "know" the system and simply build themselves into so-called "impregnable" positions - where it is easier for the City to retrospectively approve plans rather than face possible legal action from a developer who will claim that it should not be prejudiced, at a later stage, when that the City allowed the contraventions in the first place.

Ms Walters must resolve this problem urgently to regain any modicum of community confidence in her department. 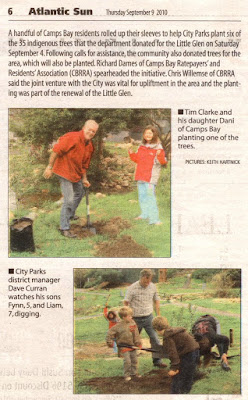