Bo-Kaap Residents and developer back in court 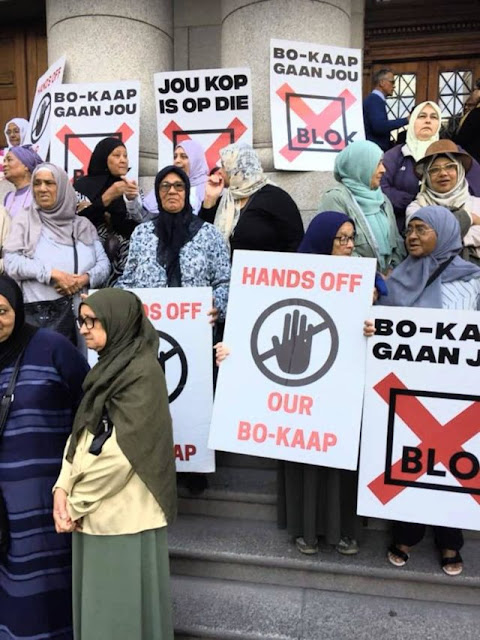 Bo-Kaap residents outside the Western Cape High Court on Monday May 13.

The development on 40 Lion Street is once again at the centre of a battle between Bo-Kaap residents and Blok Urban developers.
On Monday May 13, the community was back in the Western Cape High Court opposing the substitution of ownership of 40 Lion Street by Blok Properties to Prime Point Properties. According to the Bo-Kaap Civic and Ratepayers, Blok served the application on Monday May 6 and the matter was set down for hearing on Monday May 13.
Followingthis move,thecivic said the developers showedcomplete disrespecttothe communityduringthe month of Ramadaan.
“The application was also brought on the eve of the Bo-Kaap’s victory of having 19 sites declared as national heritage sites by the national Department of Arts and Culture,” said Jacky Poking, Bo-Kaap Civic and Ratepayers’ Association secretary.
The issue with the said development dates back to November 2017, when residents were up in arms over the proposed development, which they said would impact on the heritage of the area. The community submitted more than 500 objections to the City in respect of the development of the property (“Uproar over Lion Street proposal,” Atlantic Sun December 14 2017).
The community started to protest against the development in April last year.
In July last year, residents picketed outside the high court to oppose the court interdict by Blok and air their grievances relating to developments in their area. Blok withdrew its application, stating that they’d engage with the community.
This never happened residents said, claiming that Blok never engaged with them. Countering this, Blok claimed that an attempt to positively engage with “a small group of individuals” who were unlawfullyinterferingwithconstruction deliveries to the Lion Street site had been met withcontempt. As such law en-forcement had ad-visedBlokto approach the courts in order to ensure safe deliveries to the site, they said.
In November last year, Blok Properties brought an interdict application against “all other persons causing obstructions, unlawfully conducting themselves or attempting to cause obstructions”. This caused chaos as the residents blocked the crane that tried to enter the area to the construction site (“Chaos as Bo-Kaap residents block crane,” Atlantic Sun, November 22 2018).
Blok no longer possesses the legal standing to pursue their relief sought in the initial interdict application.
According to the Cape Argus, the new owners of the building stated: “The applicant seeks to persist with the relief sought by Blok in both applications.”
The civic association has vowed to request the South African Revenue Services to investigate the sale of the property from Blok to Prime Point Properties.
“The Bo-Kaap will remain resilient and steadfast in its fight against gentrification as the City and developers attempt to purge the city of poor and working-class people. It will continue to oppose developers who have no regard for the heritage, culture and history of the area and whose only goal is to fill their capitalist pockets,” they said.
The matter has been postponed to Monday May 27.
By
SINAZO MKOKO
https://www.atlanticsun.co.za/news/residents-and-developer-back-in-court-23260972
No comments: 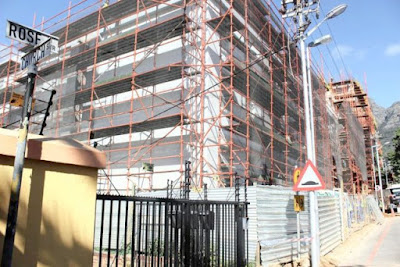 Despite objections, the Municipal Tribunal Planning (MPT) has approved an application for departures on Erf 932 on Victoria Road, Bantry Bay.
The applicant, through Tho-mas Geh Architect, proposed to develop a five-storey apartment building comprising of eight units and eight parking bays.
A departure to allow the building to project above an abutting footway along a scenic drive is also proposed.
The proposed total height of the building is 15 metres and a building up to 25m high can be permitted on the site.
The property is zoned General Residential 4 (GR4), which allows for a range of residential land uses.
In its motivation for approval, the applicant stated that the departures are consistent with the high-level objectives of social development strategy which include buil-ding and promoting safe households, communities and promote and foster social integration. They said the proposal increases accessibility, efficiency and sustainability of public transport.
The applicant added that the departures will enable additional dwelling units to be built which would contribute to the efficient use of existing infrastructure and additional amenities. They stated that employment opportunities would be created and this would not only have a positive socio-economic impact on the area but the increase in residential accommodation would also enhance social aspects of the area.
In terms of safety, health and wellbeing in the community, the applicant stated that there would be no impact and the increased density would lead to informal surveillance and security which would lead to better investment decisions to benefit the community. They said the proposed units would result in better welfare of households who take up residency. The applicant said the proposal is sensitive to the character of the surrounding built and natural environment.
Residents objected to the departures, with the planning committee of the Sea Point, Fresnaye and Bantry Bay Ratepayers’ Association SFB) saying that the departures viewed in their entirety and in the context of the affected neighbours and surrounding streetscape, would result in an overbearing and oversized building that cannot be justified by relying on “densification”. “What it, in fact is, is an unconscionable attempt to maximise the developer’s profit at the expense of the surrounding property owners’ rights,” they said.
The committee added that the departures do not serve the purpose of improving anomalies occasioned by the shape, characteristics of the erf thereby justifying necessary departures from zoning scheme regulations in order to produce a more viable or rational outcome.”On the contrary, they make a fool of the regulations which are honoured only in the breach were they to be allowed,” they said.
They said the did not wish to encourage the development in the area and expected planning authorities to respect their position as a responsible ratepayer association. “The application is egregious because it is disrespectful of neighbouring property rights and will produce a building that, in terms of its size and shape, is desirable only in the developer’s pocketbook.”
Some residents were concerned that allowing this degree of coverage of their property could only result in other owners applying for the same departures, eventually turning this section of the road into a city centre type of street bounded by large unattractive buildings.
By
SINAZO MKOKO