The Camps Bay Ratepayers & Residents Association (CBRRA) is deeply disappointed that the City's Mayoral Committee chose to ignore the opportunity to pursue a community-based solution to the issue of the Camps Bay Prep School's expansion onto the City-owned (public open space) land currently leased by the almost century old Bowling Club.

CBRRA trusts that common sense will prevail upon the full sitting of Council when it meets this week to vote on the matter and that councillors are given a conscience vote rather than a party discipline instruction.

The CBRRA will continue to work towards the shared/partitioned option but is alarmed by Deputy Mayor Ian Neilson's most recent comment that the only financially viable option is for the school to "take over" all the current buildings that were erected at the sole cost of the bowling club. The fact that the school, which has always claimed that it is in funds to effect the required changes to convert the existing parking lot into classrooms and play area (part of the CBRRA shared option), is now claiming a lack of funds appears to suggest that it is prepared to effectively steal the club's building assets under the protection of its purported political patronage.

More importantly, the Mayco recommendation is for the eviction to be effected only after the statutory land use processes are complete. This could take many years and therefore the recommendation is illogical and unnecessarily prejudicial to the bowling club, which will have to continue in an untenable state of limbo.

It is also not too helpful to the school - as great expectations have been raised, which might come to nought if, say, the Environmental Impact Assessment (EIA) study returns a negative recommendation.

It must be noted that the City report is, in the CBRRA's opinion, totally lacking as it not only ignored the will, opinion and rights of the community but failed to properly interrogate the actual needs of the school and merely pandered to a wish list.
The EIA will have to be independent and cannot be politically manipulated. If it fails the test of impartiality, it will be susceptible to legal challenge and setting aside upon review.

Further, this is a non-renewable lease - so what happens to the land once the school's 10 year non-renewable lease expires and the bowling club is long gone? Of course, the City will be positioned to benefit itself by selling off public owned land to developers for short-term gain. One also wonders whether the school governing body has considered the impact of spending its funds (and Education Department funding) on such a short term project.

It is time to remind the City that it doesn't own public open spaces - it administers such land on behalf of the citizens and ratepayers of Cape Town. It is a certainty that the people of Cape Town are not in favour of the City giving away such scarce resources and the City's recent about turn on the Princess Vlei matter confirms this.

The CBRRA urgently calls on the public representatives in the City and Province to revisit this matter and call on all parties to return to the negotiating table, which the CBRRA is confident will result in a positive solution which could speedily be effected to the benefit of both education and sport. 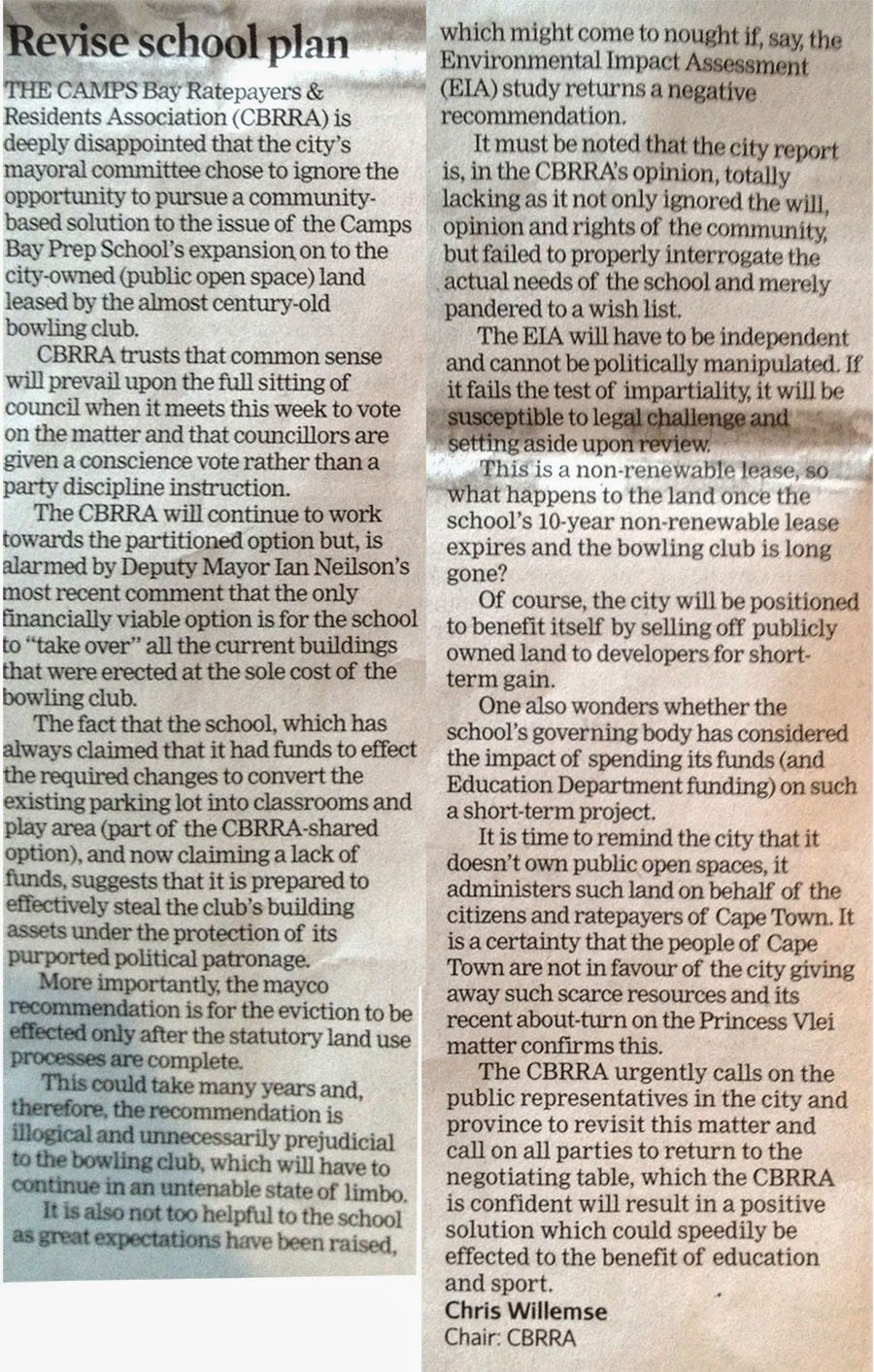