Win for maidens Cove for All 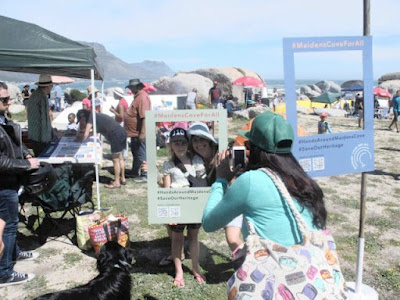 
“Our public open spaces are precious. They should not be sold off to the highest bidder. Any development should fully respect the area’s heritage status and be for the benefit all the people of our city, not just to make a few rich people richer.”
So said the chairperson of Maiden’s Cove for All (MCA), Vanessa September, following the City of Cape Town’s withdrawal to oppose the Maiden’s Cove review application.
The application was filed by the Bungalow Owners’ Association (BOA) and Others asking the court to review and set aside the City’s decision to sell and lease the City-owned land between the Clifton bungalows and Camps Bay.
MCA is a non-profit organisation that was established in June this year to represent the broader Cape Town community in protecting and ensuring continued access for all to the public open space.
The office of the City’s mayoral committee member for assets and facilities management, Stuart Diamond, released a statement on Friday October 12 announcing its withdrawal to oppose the review application brought by a number of litigants in the High Court.
Until this past Friday, the City had opposed the review application. The statement said the City had subsequently, and after consulting senior counsel, decided against opposing the review application, which means it will proceed unopposed by the City.
“Over the past months, we have taken note of the concerns raised by residents, non-profit organisations, and others. These concerns relate to the impact the proposed development could have on Maiden’s Cove, and how it could affect those who frequently visit the area. We have heard their pleas, read their letters and opinion pieces, and reflected on their arguments,” read the statement.
The BOA has recently served a court order on the City and other respondents, compelling them to file their answering affidavits on or before Wednesday October 24.
In its application, the BOA was joined by MCA. The organisation aimed to stop the proposed development and wanted a public participation process where the City would include the voices of those who use the space.
MCA has welcomed the news and said they would be happy to liaise with the City on developing a democratic and community-friendly way of inviting active public involvement in relation to how Maiden’s Cove and similar areas could be improved.
“We are thrilled that the City has thrown in the towel before more citizens money and time were wasted on this ludicrous project,” said Ms September.
“There are some things that money can’t buy. One of them is the determination of ordinary people who have frequented the area for decades, not to forego their right to greater, not lesser, access to the sea.”
The chairperson for the Camps Bay and Clifton Ratepayers’ Association (CBCRA), Chris Willemse, said they were pleased with the City’s decision.
Mr Willemse said the community of Camps Bay and Clifton was grateful to the BOA and MCA for taking the matter to court.
“However, the City pulling out of the matter doesn’t stop the developer. If the City is to be taken seriously in consulting communities, they’d need to put the decision to sell the land on review and have it set aside by the court, otherwise, if they don’t do that, this would be a political step ahead of elections,” he said.
Richard Summers, the attorney representing BOA, said: “This is a watershed moment in the conduct of this case.
“Given the reasons informing the City’s withdrawal, the BOA – and the other Applicants – are cautiously optimistic regarding a positive outcome of this case. The fact remains that the entity to which the tender was awarded by the City is still on record as opposing the application. The entity in question K2015298271 South Africa (Pty) Ltd is due to file answering affidavits on or before October 24. Although the City’s volte-face is highly significant for the merits of the case, it remains to be seen whether the developer will follow suit.”
No comments:

The caretaker of the Oudekraal Kramat was attacked by five armed men.


The Muslim Judicial Council has condemned the attack on the caretaker of the Oudekraal Kramat, near Camps Bay.
The man and his family were attacked by a gang of five armed assailants in their home at the Oudekraal Kramat in the early hours of last Tuesday.
The second deputy president of the Muslim Judicial Council, Sheikh Riad Fataar, said they were saddened to hear about the incident.
“We are deeply saddened upon hearing of the attack on those who preserve sacred burial sites in Islam,” said Mr Fataar.
“The increase of crime and gangsterism has led to the unsafe conditions at cemeteries and we call on the South African Police Service and the necessary authorities to fulfil their responsibility toward the protection of all communities. We pray for a speedy recovery for the caretaker and his family,” he said.
TheOudekraal Kramat, fondly known as the 99 steps Kramat, houses the remains of a prominent Muslim scholar, Sheikh Noorul Mubeen who was a political prisoner banished to the Cape in 1716 and incarcerated on Robben Island.
Policespokesperson, Lieutenant Colonel André Traut, said the matter was being investigated. “This office can confirm that the circumstances surrounding a house robbery in Oudekraal are being investigated, following an incident during the early hours of Tuesday morning at around 3.30 am.
“The three occupants of the house were attacked by a group of suspects who are yet to be arrested.”
By Atlantic Sun
https://www.atlanticsun.co.za/news/mjc-condemns-attack-at-kramat-17516278
No comments:

Ten of the City’s beaches were given full Blue Flag status earlier today.
Blue Flag is an international accreditation which is awarded to beaches that display excellence through meeting 33 criteria covering four categories namely, environmental education and information, water quality, environmental management and safety.
Bikini Beach, Camps Bay Beach, Clifton 4th Beach, Fish Hoek, Llandudno, Mnandi Beach, Muizenberg Beach, Melkbosstrand, Silwerstroomstrand and Strandfontein Beach were awarded full Blue Flag status for the summer season period between Saturday December 1 2018 and Thursday January 21 next year.
Participation is voluntary and the accreditation status indicates that beaches are clean; have adequate ablution facilities and parking; are environmentally sound; are safe and secure to visit and adhere to international safety and tourism standards.
The City says the Recreation and Parks Department works hard to ensure that Cape Town maintains these standards, but needs the public’s cooperation to ensure that beaches are safe recreational spaces.

By Atlantic Sun
https://www.atlanticsun.co.za/news/10-ct-beaches-achieve-blue-flag-status-17453568
No comments:

A proposal to rename Link Road to Theatre Lane has been submitted to the Citys Naming and Nomination committee.


Camps Bay’s Link Road could soon become Theatre Lane if theatre veteran Pieter Toerien has his way.
The matter appeared on the agenda of the City’s Naming and Nomination Committee on Friday, September 21 after Mr Toerien. submitted an application to have the road renamed.
In his motivation, Mr Toerien, the owner of Theatre on the Bay, which is located in Link Road, said the current name lacked the potential to reflect the pride and vibrancy of the road, and that renaming it would boost the personality of the street and raise the profile of the neighbourhood.
“Over the last 30 years, the element of tourism benefiting the residents situated on the road has not only withstood the trials of lagging footfall and intense water restrictions but rather maintained stability into constant growth. I feel that a name change would benefit everyone in assisting tourists in choosing Camps Bay as their preferred holiday destination all year round,” he said.
With renovations of Theatre On The Bay now completed (“A brief curtain closure”, Atlantic Sun, April 19), Mr Toerien said it felt like the perfect time to make a request to rename Link Road to Theatre Lane and so inject a new vibrancy and interest in the area.
“It is all about timing and we would love Camps Bay to share in our excitement in the next 30 years of Theatre On The Bay and beyond, he said.”
Mr Toerien said he remained committed to the betterment of Camps Bay in every way possible, not only as a business owner but also as a long-standing resident with an unflagging passion for their beautiful spot in the sun.
In his application, Mr Toerien included affected residents’ support. “Having such close and supportive neighbours, we would like to represent their modern and progressive ideals,” he said.
The chairperson of the Camps Bay and Clifton Residents’ Association (CBCRRA), Chris Willemse, said they did not know about the proposal.
However, he added, they did not have any problem with it.
The City’s chairperson of the Naming and Nomination Committee, Brett Herron, said the committee had agreed to send the report back for further information and for a legal opinion from the City’s Legal Services Department to ensure that any recommendation which the committee made, did not fall foul of section 5.6 of the City of Cape Town Naming Policy 2012 which relates to “names which may be construed to be commercial advertising except where the council has entered into an agreement which includes naming rights”.
“We await the outcome of the legal opinion,” he said.
By Sinazo Mkoko
https://www.atlanticsun.co.za/news/proposal-to-rename-link-road-17337872
No comments:

Hilda, the goat that was found with a knife in its back on Camps Bay beach last week.

A goat with a dagger in its back was found between the rocks at Camps Bay last week, by law enforcement officers who were doing routine patrols in the area.
Law enforcement officers notified the Cape of Good Hope SPCA who came to rescue the animal which had lost a lot of blood.
According to SPCA’s spokesperson, Belinda Abraham, the black, wooden-handled dagger with a red cloth tied around it, had been lodged deep in the back of the goat.
Ms Abraham said they suspected that Hilda, as they named the goat, had been a victim of a ritual sacrifice during the night but had managed to escape. “We suspect that Hilda, survived a sacrificial ritual. The handle of the dagger removed from her back was wrapped in a red fabric and hair was knotted into the cloth,” she said.
Hilda is currently recovering in the farmyard and despite the deep wound, Ms Abraham said they expected her to recover fully.
She said the goat would remain at the SPCA until she was well enough to be placed in a loving home.
Ms Abraham said stabbing an animal in this manner and not seeking veterinary assistance were contraventions of the Animal Protection Act. “It is a contravention of the Animals Protection Act No. 71 of 1962 to cause an animal to suffer in this manner and itis equally criminal to neglect to seek veterinary assistance for an injured animal.”
People expressed shock and anger on social media. Weighing in on the incident, Bianca Gittele Turok said: “You have to catch them and charge them; they can not get away with this evil and abuse.”
The incident also sparked debate among vegans and meat-eaters. Commenting on Facebook, Nikki De Villiers Gray said: “This is absolutely horrendous, however, she is one of the few lucky ones who escape. Sadly millions of animals suffer a fate far worse than this every day in an abattoir near you.”
No arrests have been made thus far and no one has come forward with any information as yet.
The SPCA is appealing to the members of the public to come forward if they know anything. Contact the SPCA on 0217004158/9 during office hours or on 083 326 1604 after hours. The SPCA will never reveal the identity of a complainant and information can be given anonymously.