From: Demetri Qually
Sent: 20 April 2016 11:04 AM
To: Vivienne Sasman
Subject: text to include in email of presentation distribution

Greetings to the Community Organisation in SC16

The Deputy Executive Mayor’s gave a presentation in the Good Hope subcouncil chamber on the Strategic Approach to City Development on Tuesday 19th April to which community organisations were invited.

The presentation gives a useful insight into the City’s thinking which directed the development of its priorities and budget.

Those who attended the presentation found it very worthwhile, that it gave much greater clarity on the issues and challenges facing the municipality and a context to the tabled budget. They have asked for a copy of the presentation.

We have decided to extend the distribution of the presentation to all community organisations on our database as well as our ward committee members. Although missing the Deputy Mayor’s further explanations and answers to questions, we believe you will also find the PowerPoint presentation informative and helpful.

Making Home Composting possible for you 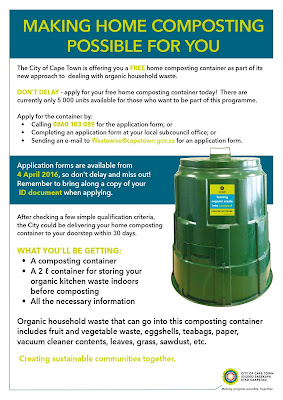 No safe water in Little Glen 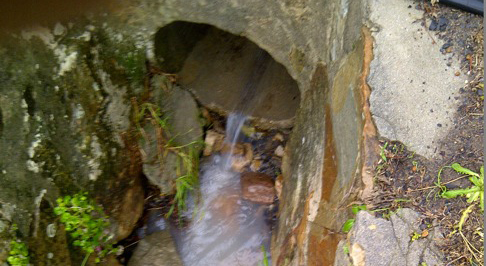 Local resident Arthur Shephard writes to inform us as follows:

I have had a few people over the past year or so when they see me in the Little Glen asking if it is ‘safe’ for their children to play in the water. My answer has always been NO – whilst the water may look clean a chat with the father of a young son who contracted scarlet fever last summer – has confirmed that opinion. His son was playing a way upstream of the scout huts where the river has a small wall (near the Ingleside exit) and appeared to be clean.

Unfortunately the river is used for washing and as a latrine by the homeless and others, plus it also gets polluted from overflowing sewage drains and contamination in storm water drains occasionally. The picture attached shows polluted water exiting from a storm water outlet directly into the river by the wooden bridge last week, and I have others showing sewage and polluted storm water from higher up the Little Glen from earlier in the year. Rest assured myself and others are in touch with various responsible departments in the city to try and eliminate this unacceptable pollution, but it is unlikely we will be able to stop the odd individual from using the water as their personal latrine at times so best not to let your children play in the water just in case.

A dog poo bin was recently installed in the Little Glen and has a plastic bag dispenser for those who forget to take their own with them. The roll of 60 I put in initially has lasted just over a week – are any of you in the plastic bag manufacturing business and could supply bags? Alternatively anyone who wishes to sponsor the ongoing cost for any period of time please contact me.

This article was published by http://1stcampsbay.co.za/little-glen-river-water-pollution-and-dog-poo-bins-bags/
No comments:

Recent property developments in Cape Town make it clear to its citizens that the city is run by people who favour rich property developers over the common good. While the substantial rates, taxes and other revenues that they expect to collect from such developments will doubtless help to pay for their impressive salaries, bonuses, pensions, fact finding excursions and other indulgences, it is the average citizen who is penalised.

Their decisions are no better than those that gave us the Tampon Towers in the city bowl and other freaks of urban planning back in the 1970s.

The city's intrinsically unfair policy of rates based on amateur property valuations is exacerbated by house price inflation, triggered by easy monetary policies in rich nations and opportunistic attacks on our national currency, to the extent that many hard working and honest people are being forced from their homes. In a world dominated by corruption in big business, finance and politics, those who actually create wealth have been marginalised and are seen merely as cash cows to be milked until death.

Perhaps this is why city planners see fit to approve buildings that have no architectural merit and degrade our urban landscape in order to maximise the taxable concrete and glass per square metre of land. Their stupidity is that by doing so they are destroying what makes our city so attractive. A couple of examples suffice. Utterly out of character with its locale, Suleiman's Seraglio on Geneva Drive overlooking Camps Bay is a monstrosity evocative of the ostentatious excess and inequality of the time of Gatsby. It has no place in a developing city such as ours.

While we are resigned to the slab sided mediocrity of much local architecture, the new apartment blocks that sandwich Houghton Steps on Balie Bay, reminiscent of brutish public buildings of a socialist era, leave not a scrap of greenery or setback and totally ignore the rights of helpless and hapless neighbours. Although their architects may not have the talent of a Louis Karol or Stefan Antoni, we had come to expect some aesthetic merit in their buildings.

I fear this is no longer true. Bought by a rugby player from Louis Luyt's glory days, they have changed their profession from architect to prostitute with the help of the pimps in city planning which approved this urban pornography. I wonder how many now have Euro accounts in the tax haven of Ireland where this developer has his “head office”. Indeed his property developments may just be a vehicle to export capital. And why not – if it stays here it will certainly be eroded by our politicians and bureaucrats.

Arbitrary Taxation and Unethical Enforcement
To better understand this ugly situation the table below summarises the revenue models employed by central government, by the city of Cape Town, and by a typical business entity:

Revenue earned by business and central government is generally in proportion to the goods and services provided to customers and taxpayers, whereas municipal revenues are arbitrary and are driven by factors completely outside the control of ratepayers. Furthermore it is clear that a business that does not properly handle stakeholder requests and complaints will not survive. Our central government provides a fair and effective service to taxpayers via the SARS website and call centres.

But service requests posted on the city website generate automated replies which are almost never followed up and to phone a competent human in its bureaucracy is virtually impossible. In short, Cape Town officials do not respond to requests, objections or complaints about its arbitrary planning decisions and unfair rates and tariffs. Indeed they coerce citizens to accept this situation by cutting off services without notice in the event of dispute. This is an unethical and unconstitutional abuse of power.

So what to do? The upcoming local government elections provide an opportunity for us all to recognise the malevolent role of the DA's friends in big business and of its arbitrary and unfair policies and vote accordingly. Due to extraordinary escalation in rates and tariffs we will be putting, for the first time ever, our staff on short time during the coming winter. We will make quite clear to them the role of the city in our decision.

To make a real difference however we intend to challenge in the realms of politics, media and law the party, the city and the individuals whose decisions so badly prejudice the quality of our lives. Sickened by the city's use of public funds to defend itself against legal challenges by its citizens, we intend to cite as co-respondents, in their personal capacities, these “professional” architects, bureaucrats and politicians as we seek to recover the damages that their flawed and corrupt decisions have so clearly caused. I strongly suggest that you advise them of this liability so that they can budget, like most of your more productive citizens, for the very substantial amounts they will be forced to pay.

We have reason to believe that we will be supported by powerful individuals and institutions which are also fed up with the arrogance and indifference of the DA, its appointees and its benefactors.