A German tourist was seriously injured when his paraglider folded and he crashed near Camps Bay, Cape Town, according to a report on Tuesday.

The Cape Times reported that the tourist, known only as Mr Ulrich, had taken off on his second flight of the day from Lion's Head on Monday.

Birdmen Paragliding owner Barry Pedersen told the newspaper that by the time he opened his parachute it was too late as he was near the ground.

He crash-landed at Maiden's Cove, near Camps Bay, injuring his leg.

“He has been paragliding for years, but this was his first time piloting in South Africa. It was an isolated accident... usually turbulent air can cause something like this,” Pedersen said.

The tourist was in a stable condition in hospital. - Sapa
No comments:

31 Beta Road, Bakoven – ERVEN 2733 & 2744
Departures from the planning scheme.
Contact CBRRA for more details.
CBRRA's comments: This is an application to remove part of the embankment around the two bungalows, thus effectively making for taller buildings. The roof heights remain the same. CBRRA awaiting neighbour's input.
No comments:

Questions from resident to Councillors

Resident Carlos Liltved addressed the councillors at the Public meeting with the following questions. Answers will be posted here shortly:
I have 5 questions for our 2 Ward Councillors that I think warrant answering. I request from the Ward Councillors that I receive their answers in writing. I will hand them copies of my questions after I have read them out.
But first I would like to thank our public spirited citizens such as Chris Willemse, Bernard Shafer, Ian and Sally Merrington, Simon Kneel, Peter Mead, et cetera …who tirelessly and often thanklessly watchdog our suburb. Of course, I also thank CB Medics and all the of the hardworking civil servants who do so much.
My name is Carlos I am one of Camps Bay’s second tier watchdogs … a coal face late night CERT Team watchdog … It is most often not fun being a watchdog, but I find that in general, us Western suburban types have become too passive and someone has to do it.
Here are my questions …. In no order of preference:
(1) About a month a ago a little girl was savaged by free running dogs on Clifton Beach. Why are there still tens and tens of “free running” “off leash” dogs on Camps Bay Beach every morning … and also on the Bakoven beaches and the footpaths of the Table Mountain National Park? I refer you City Of Cape Town Animal By-Law PG 6896 LA 23607 Promulgated 5 Aug 2011 and ask what will be done about this?
(2) I request that I be forwarded all relevant By-Laws w.r.t so called Car Guards. Why is the lower part of our suburb still, after all these years infested with this rag tag mob of self appointed and unauthorised parking attendants? Apart from the genuine nuisance factor and known connection to petty crime, in my opinion having all of these people (illegally) masquerading as “bona fide” security personnel creates a false impression to visitors that car breaking and crime is in fact much more of a problem than it really is. The weekends of this summer have seen a proliferation of drunk, noisome and even extortionist individuals. It is without a doubt that the Camps Bay car guards add no value to our suburb. When and what will be done about them?
(3) I think that most of us have been down to the Glen end of the Meadows and seen the hugely out of scale home currently being built by the Solomon family. Does the three storey / 10 metre height restriction not apply to certain people? Last year I was threatened with (amongst other things): grievous bodily harm and having my house burned down for responding to a City Council invitation to object to yet another over-scale (and to my mind inappropriate) development in my sector. Sworn affidavits have been lodged with SAPS and others so if anything does happen to me they know where to start looking. I feel that structures should be put in place so that the community’s voice can be heard and that building developments such as the aforementioned can be checked in good time … and such that citizens need not fear intimidation from developers. I would like to know why and how the construction of the Solomon building has been permitted? I would like to know how we can improve the system so that we don’t have repeats of the Blinkwater/Geneva drama that cost the CBRRA so dearly?
(4) Our suburb is split in two. We have two ward councillors Beverly Schafer and Marga Hayward. One is visibly present and active in Camps Bay, the other one more or less invisible. This being … I trust … due to the latter’s Hout Bay Informal Settlement and Hangberg commitments. Surely steps should be taken, whatever they may be, to rectify the situation so that Hout Bay may have one dedicated Ward Councillor and Camps Bay another. How can this be done?
(5) Camps Bay used to have 2 off-sales, now we have none. Thank goodness the good sense of our citizenry put a stop to those problems. Unlike the majority of Cape Town’s “party zones” which are situated in commercial areas, the Camps Bay “Strip” directly abuts the residential area. Night clubs are open until 2am. A few late night license holders profit massively while the entire lower part of the suburb suffers the fallout: Noise, drunk drivers, beggars, child beggars, vagrants, drug dealers, petty crime and squalor. Last Saturday evening 2 mothers with babies + 13 child beggars between 5 and 12 years old had to be handled by SAPS and social workers. I often see toddlers awake and being used as begging tools to extract cash from well lubricated tourists long after midnight. I suggest that when liquor licenses come up for renewal they be on a “liquor with dinner basis only” … call last round for liquor sale at 11h00 pm across the board. All doors closed by 24h00. This will force the “trouble magnet” late night venues to convert their operations to bona fide restaurants or setup in the city downtown area where they belong. Can this be achieved and by which process?
I thank you
Carlos Liltved
Carlos Liltved – 082 922 0119 – carlos @ 1012.co.za
No comments:

17 Pitlochry Road, Camps Bay – ERF 2358
Right of appeal: Subdivision and departures from the planning scheme.
Contact CBRRA for more details.
CBRRA Comment: CBRRA successfully opposed the departure application but the Good Hope Sub Council approved the subdivision. CBRRA will now appeal the subdivision to the Provincial Minister of Planning.
Letter of appeal will be posted here.
No comments: 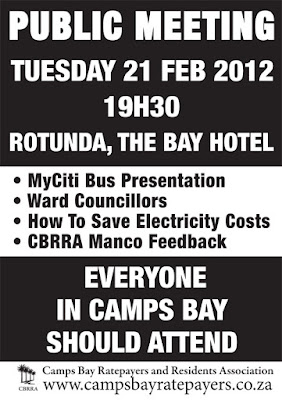