New tariffs frowned upon by residents 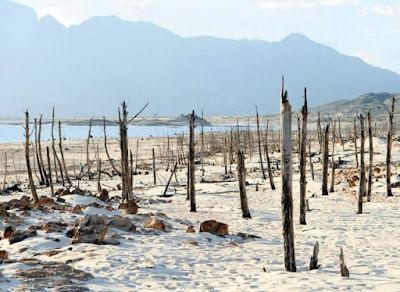 The City of Cape Town said the new tariffs are to ensure that residents stick to the allocated 50 litres a day under Level 6B water restrictions.
Meanwhile deputy mayor Ian Neilson announced this week that Day Zero has been pushed back to Monday June 4.
The new water restrictions tariffs are 6kl: R179.58, 10.5kl: R415.56, 20kl: R1555.56, 35kl R6 685.56 and 50kl R20 365.56.
According to the City, over the past week, consumption has been lowered to 526 million litres per day. “This is the first time that the weekly average usage has remained under 550 million litres due to the City’s pressure management interventions and the efforts by our residents to use as little water as possible,” said Mr Neilson.
However, the new tariffs have been criticised by some residents in the area. Richard Bendal, deputy chairperson of the Camps Bay and Clifton Ratepayers’ Association, called the tariffs “atrocious”.
He also said that it was unfair to punish residents who have been doing their best to save water. “They are totally unfair. The word punitive means punished. You’ve also got a huge discrepancy between businesses and residents. I understand we’re in a crisis but it makes no sense to punish people who’ve done well. Businesses have not pitched in until now and now it’s too little, too late.” He also said that the new tariffs were just the City’s second option to the proposed drought levy which was knocked back in Council.
Osman Shaboodien, chairperson of the Bo-Kaap Civic and Ratepayers’ Association, also criticised the water tariffs. “It is disgusting. We should not have to pay for the incompetence of politicians.” He also said that the poor people in Cape Town will be hit hardest by the new tariffs.
Mr Shaboodien said the infighting within the DA was merely exacerbating the problem. “We as Cape Town need to come together and fix this mess. This madness must stop. If we don’t tackle the problem then we are all going to lose. We were led to believe that everything was under control,” he said.
The City of Cape Town added that dam levels are at only 24.9% compared to 36.1% last year and 43.3% in 2016. Mr Neilson said although the dam levels are much lower than a year ago, they have more information and more control over the system that supplies water to the city.
“Our continued interactions with the national Department of Water and Sanitation have led to much improved data-sharing and analysis, allowing for more reliable modelling and dramatically improved control over dam levels.”
By
MATTHEW HIRSCH

The Betrayal of the City of Cape Town

Three reasons exist as to why the Western Cape is in the claws of a doomsday Day Zero scenario with Capetonians made to feel like water wasting minions. Two reasons are manmade while the third, mother-nature, is mercilessly exposing them.

Firstly, let’s take a look at the Western Cape agricultural sector. According to Alan Winde of the DA, in 2013 the gross rand value of the sector was R12bn with a projected growth of 126% by 2019. This exceptional growth will be brought about the Khulisa growth plan and the Smart Agri plan announced by the Western Cape Province in May last year – generously funded by the DA-run Province amidst a conspicuous absence of expansion plans for dams or water supply required to support the heavily increasing agricultural activities.

The reality is 3.7m citizens of the City of Cape Town and the agricultural sector are sharing Theewaterskloof dam, which accounts for 53% of the total capacity of the 6 major dams of the Western Cape. Incidentally, water levels in the dam are sitting at 12,5% on 5 February 2018.

Since the beginning of Spring, the agricultural sector was drawing around 1200ML of water from Tweewaterskloof per day. During the same period, residential usage started around the same amount and saw a rapid decline due to the City Of Cape Town mercilessly driving down water usage of citizens, to a usage of 547 ML’s per day (Dashboard, 5 February 2018). The agricultural sector, however, unabatedly continued to use 1200ML per day until more or less ten days ago, despite calls by DWS to reduce water usage by at first 40% and then by 60%.

Agriculture was directed, as far back as November 2017, to reduce their water usage, but a look at the City’s dashboard reveals this reduction only began 10 days ago. Farmers were unabatedly rushing to fill their quotas, placing tremendous strain on the supply of water to themselves as well as the citizens of Cape Town.

According to the City’s dashboard, the agricultural sector has substantially exceeded their water usage target each week since November 2017.

A closer look at the “wasteful” citizens of the Metro City.

It was fact-checked, by the City, that citizens use 65% of the water supplied.

A simple calculation shows the following for the week ending 5 February 2018; Total water usage by the people living in the Metro is 65% of the 547ML allocated in total – this divided by the 3.7 million citizens gives us a conservative maximum usage, per person, of 95l per day.

However, the figure of 3.7 million people is based on the most recent census, conducted in 2011 whereas it is widely believed many more people live in the Metro City. 95l per person a day is, therefore, an overestimate – it can be reasonably assumed that actual usage is lower per person.

Reason number two is the strategy chosen by the City of Cape Town to drive down water usage of citizens, at any cost. Whereas agriculture is set on a growth path requiring higher usage in the absence of any augmentation plans, citizens, who rely on the same source, are forced to reduce water usage.

A further strategic flaw is the forceful installation of Water Management Devices, at a cost of over R4000 each and a rate of 2000 per week – while forcing citizens to accept and be liable for costs. These meters are often faulty, leaving households without water for days, which is causing frustration an general mistrust amongst residents.

It is, therefore, no secret that the Citizens of Cape Town are angry and feel done in. The well-hidden origin of all of this saw light yesterday when the City’s dashboard finally shows what is going on. It is therefore welcomed that all users of the six major dams are now being treated equally. The reduction in water usage by the agricultural sector over the last ten days made a month’s difference in the lives of 3,7 million people. Day Zero was moved out by almost one month and we can breathe again, for a while.

The City of Cape Town and the Western Province DA controlled governments must be stopped in their tracks before they effectively ruin the entire Province for every person living in it.

The City of Cape Town point blank refuses to let go of their plan to plug the R1.7bn hole in their budget via a Tax on households. This shortfall came about as the City introduced stringent water restrictions on the citizens of Cape Town as a result of the drought and their predicted Day Zero.

Nielsen from the Mayco of the city: “Council is facing a R 1.7 billion deficit in the current financial year as a result of the strict water restrictions and consequent loss of income.”

During the public participation process around the Drought Charge, the City received 61,002 emails from angry Cape Town citizens who opposed the 10% Drought Charge, calculated on the value of property rates bills. 91% of these emails were sent from a citizen’s initiative website, www.dearcapetown.co.za.

By 19 January the city had processed 36 444 (60%) of the emails they received. The city did not even have the courtesy to process all of the emails before they rushed to concoct an alternative means to Tax citizens.

The three major objections identified by the city are;

Unfair and punitive 34.76%
Bad Planning 21.89%
Overtaxed 14.59%
However, these clear objections fell on deaf City official’s ears as the city responded by immediately proposing a tax of 8% be slapped on top of Property Rates accounts as an alternative.

It is, therefore, the same Tax applied to another service as an attempt to plug the R1.7 deficit. This money is not for any water augmentation solution.

The respondents of the public participation process further offered solutions including sourcing funding from Central Government or the City accessing funds from the bonds market. None of the proposals received from respondents proposes a Property Tax as a solution.

It is clear the City is wholly confused as their attempts to plug the hole in their budget is “marketed” to citizens as “money needed to augment our water supply”. In reality, the money is needed to balance their books. To date, the city has awarded R1,5 Billion Rand in tenders for desalination and borehole solutions to augment the water supply. Residents have yet to witness a single completed project and are asking questions over why investigations at Monwabisi and Strandfontein reveal heaps of pipes, but no signs of desalination plant construction.

Water experts including, Anthony Turton seriously question the workability of the borehole solutions, as the laying of pipes from the boreholes to the reticulation system and purifying plants will be over private land as there are servitude issues.

The city appears too stubborn to change its ways and is not listening to the public. Instead, the voice of the people is warped and misconstrued to suit ineffective and decades-old solutions. If the city’s methods were effective, the water security issue would have been addressed in a more holistic manner and DAY ZERO would not be an issue.

Residents call on the City to change their ways and to adjust to the South African economy where salary increases are below inflation and the country’s GDP is under 1%. The city simply cannot continue to slap above-inflation increases onto ratepayers for every service.

The city needs to be reformed immediately by realising they cannot operate in isolation and pass the financial buck via taxing citizens when money is needed.