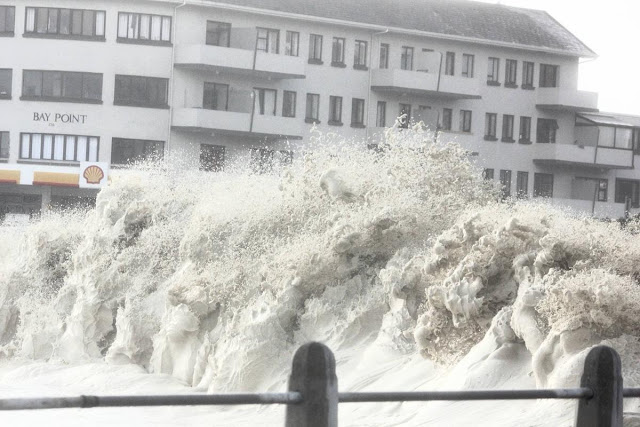 The NSRI Bakoven sea rescue station suffered extensive damages during the storm last week.
The rescue station was flooded and an electrical box caught alight, causing fire damage last Wednesday, June 7.
Most of the equipment and the sea rescue boat Rotarian Schipper had been moved to safety the day before in preparation for the storm.
Craig Lambinon, spokesman for the NSRI, said the base would require expensive repair work.
The NSRI said on the same day a woman was trapped on the rocks in the tidal pool at Camps Bay.
Mr Lambinon said the woman had been sitting on the rocks for some time and was stranded when the high tide came in.
She was helped to safety by bystanders and treated by Community Medics paramedics and by ER24 ambulance services. She was then taken to the police station until her family could be reached.
The storm also damaged 135 schools across the province.
MEC for Education in the Western Cape, Debbie Schäfer said theywould fix minor damages as soon as possible.
Public schools across the province were closed last Wednesday in anticipation of the storm which was expected to be the worst in 30 years. Winds of up to 90km an hour were predicted along with much needed rain in the drought-ravaged Western Cape.
In Lavender Hill, 69-year-old Joseph Conning died when part of his neighbour’s unfinished double-storey house fell on him.
Mr Conning was standing in the kitchen of his wendy house.
Mr Conning’s nephew Jody Africa, 19, was with him in the wendy house and sustained head injuries.
The family, however, said they don’t harbour any resentment towards the neighbour Chrisandro Dirks, a shoemaker, who was periodically building the double-storey house as money came in.
“We started about four years ago and we were in the process of building two bedrooms. What happened is such a tragedy because Uncle Joe was my friend. We spoke every morning and I am very sad that he died the way he did,” said Mr Dirks.