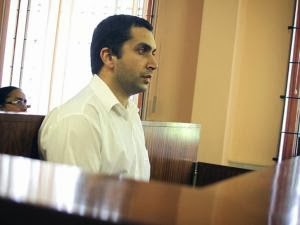 An Australian accountant who petrol-bombed the luxury home of Clifton businessman Philip Rhind was jailed for nine years on Thursday.

Francois van Zyl, for Ghumman, notified the court that he would launch an application for leave to appeal against the conviction and sentence.

The application would be brought on Friday next week, he told the court.

Magistrate Herman Pieters said Ghumman harboured a deep-rooted grudge against Rhind, for interfering in his relationship with Rhind's daughter Hannah.

"This case results from that grudge; Ghumman still has that grudge and there is no guarantee that he will not still have this grudge on his eventual release from prison," Pieters said.

"There is no guarantee that he will not repeat his actions to satisfy his grudge, when he is released from prison."

Hannah, who met Ghumman in the United Kingdom, believed their relationship was merely a platonic friendship, but she ended it when she realised that Ghumman had "romantic ideas".

When Ghumman persisted, however, Hannah turned to her father for protection, and the father warned Ghumman to leave her alone.

Ghumman followed secretly when Hannah went home to her parents, located the house and engaged a "hitman" with gangster connections to petrol-bomb the house.

However, when the "hitman" got cold feet, Ghumman did it himself, hurling three petrol bombs at the house.

The Rhind family survived the attempt to raze their home, and the incident gave rise to the incitement and attempted murder charges.

The malicious damage charge related to damage that Ghumman deliberately caused to the Rhind family's car.

On the fraud charge, Ghumman falsely informed senior Cape Town journalists, including Raymond Joseph, that he was a freelance journalist wanting to do a photo-story about gang violence in the Western Cape.

This resulted in Ghumman being introduced to the hitman.

"She said her son had to learn to respect the law, and not to take the law into his own hands."

Pieters said he did not believe that Hannah had "led Ghumman on", as claimed by Dr Ghumman.

He said no one except prosecuting counsel Billy Downer had acknowledged that Ghumman had acted in a wrongful manner, and Ghumman, to the very end, had blamed Rhind for his actions.

Of Rhind himself, Pieters said: "He wants a jail sentence, seemingly forever - he wants the court to put the accused away, and throw away the keys.

"He clearly is still an angry man."

He said the courts fulfilled an important function in the community, and given the levels of violence in the country, the case called for retribution and determent.

Sentence was not a scientific calculation, and it had to serve the public interest, but if it were too lenient it would bring the administration of justice into disrepute, he said.

Pieters said Ghumman was an educated and intelligent man, and "ought to have known better". - Sapa
No comments:

Invites YOU to a Public Meeting for:


A1 SYNOPSIS: NOTES AND MANAGEMENT OF LIQUOR LICENCE APPLICATIONS

Notes:
1. All liquor licence applications now must be submitted to Designated Liquor Officer (DLO) at each SAPS office.
2. The DLO then submits it to City Manager: Office of Manager Subcouncil’s who in turn will, via Sharepoint notify each respective Subcouncil Manager.
3. Each application needs to be dealt with in total of 35 working days.
4. DLO has 7 working days to submit to City Manager.
5. City Manager to Subcouncil’s and returns to be done within the 28 working days thereafter.
6. In order to allow sufficient time to compile a report for a Subcouncil and time for Manager of Subcouncil’s to provide input to the liquor authority it in proposed that not more than 10 working days are utilized to obtain input from the relevant stakeholders.
7. Stakeholders are :
7.1 Ward Councillors
7.2 Community Based Organization (create list per ward -  email address)
7.3 Ward Committee Members (create list per ward – email  address)
7.4 SAPS Community Police Forum: Communicate via Station Commissioner
7.5 Any other possible stakeholders (To be identified in conjunction with Ward Councillors)

A2 8. Internal Departments:
8.1 Town Planner
8.2 Health
8.3 Fire and Rescue Service (Get applicable official email address per Ward)
9. Councillors need to be made aware that if no comments are received by due date it will be recorded as such in the report.
10. DLO to certify that neighboring residents were informed.
11. Councillors to note that By-Law on Trading Hours has been    promulgated.

PROCESS SUMMARY:
A. Receive application via Sharepoint/email.
B. Forward to Stakeholders with very specific due date for comments (Note that not only 10 working days allowed for comments)
C. On the 12th day prepare the report: Liquor Licences received
(Copy of template attached)
D. Notify Chairperson and Ward Councillors of meeting to be discuss report. (To be done within 24 hours after report is prepared).
E. Submit recommendation to the office of the Manager Subcouncil’s for forwarding to Western Cape Liquor Authority.

A3
Note:
(i) Attached are pages 55 and 56 (extracts from the Council agenda) referring to the process and procedure in applying for ‘’EXTENDED LIQUOR TRADING HOURS ‘’: Please discuss this with Councillors as an almost similar process are to be followed (as in the case with a liquor licence application) in dealing with these applications.
(ii) Subcouncil Managers will be responsible for points 9 – 12 (a draft report template is in process of being prepared and will be circulated under separate cover)