By MATTHEW HIRSCH
https://www.atlanticsun.co.za/news/seaboard-safety-plan-12487303
No comments:

People urged to use public transport

The City of Cape Town has urged residents to use public transport ahead of what is expected to be a busy festive period.
The City’s Transport and Urban Development Authority, in conjunction with the City’s Traffic Service, will, over the next five weeks, intervene to prevent and alleviate gridlock conditions along the Atlantic Seaboard and the False Bay coastline between Strandfontein and Muizenberg.
The City’s mayoral committee member for transport and urban development, Brett Herron, said: “We have been implementing this strategy for the past four years and intend to do so once again.
“The interventions will happen on an ad hoc basis – thus, as and when needed. More importantly, the interventions may affect those travelling in private vehicles in particular. I therefore urge residents and visitors to make use of public transport as far as possible.
“The MyCiTi service has a number of routes to and from popular spots across Cape Town – in particular to and from Sea Point, Bantry Bay, Clifton, Camps Bay and Hout Bay.
Mr Herron added: “Traffic congestion has become a regular occurrence along the Atlantic Seaboard during the holiday period. The best solution remains to avoid travelling to this area in private vehicles, and to rather opt for public transport, walking, and cycling as far as possible.
The MyCiTi service offers a hassle-free option for those who do not want to be stuck in gridlock traffic while searching for limited on-street parking.
“Visitors can park their private vehicles in the city central business district or Foreshore area and use the MyCiTi bus service or any other public transport service to reach the beaches along the Atlantic Seaboard, in particular on December 26 and January 1, which are popular beach days in perfect weather conditions.
Atlantic Seaboard
Those who have visited the Atlantic Seaboard during the festive season in previous years will know that parking is limited and that it can easily take two to three hours to travel between Sea Point and Camps Bay by car.
Interventions will take place on an ad hoc basis at the main entry points to the Atlantic Seaboard as and when gridlock conditions necessitate it.
In Sea Point and Bantry Bay, interventions may take place at the following intersections:
Queens and Beach roads
Queens and Victoria roads
Queens and Regent roads
In Camps Bay, interventions may take place at the following intersections:
Houghton Road and Camps Bay Drive
Victoria and Houghton roads
“MyCiTi buses, coaches, minibus-taxis and tour operators will have preferential access to the Atlantic Seaboard during the interventions. Those travelling in private vehicles may be stopped at these intersections and redirected back to where they were coming from until the traffic congestion has been alleviated to an acceptable level.
“Thus, private vehicles could be directed away from their desired destination for as long as it takes for the gridlock situation to subside,” said Mr Herron.
Table Mountain
Visitors to Table Mountain are also strongly advised to make use of the MyCiTi service as Kloof Nek Road becomes congested during the festive season. There is also limited parking available in the vicinity of the cableway station.
“The MyCiTi shuttle service to the Upper Table Mountain stop is free of charge, meaning visitors need only pay on Route 107 (Camps Bay) from the central business district to the top of Kloof Nek Road, where they can disembark at the Kloof Nek Stop situated at the Kloof Nek Road/Tafelberg Road intersection. From there, commuters should transfer to the Route 110 bus – the free Table Mountain shuttle service – to the Upper Tafelberg stop and disembark at the cableway station,” said Mr Herron.
The same applies to passengers who are departing from the cableway station: they embark at the Upper Tafelberg stop and will transfer to MyCiTi Route 107 at the Kloof Nek Stop at the Kloof Nek Road/Tafelberg Road intersection.
The free shuttle on Route 110 runs every 10 to 15 minutes.
Commuters are reminded that they need a myconnect card to travel on the MyCiTi bus service. A myconnect card can be purchased for R35 from selected station kiosks and participating retailers across the city.
The City will also extend the operating hours of the MyCiTi bus service on routes to the V&A Waterfront and Canal Walk, and the beaches on selected days during the festive season.
Visitors and residents are advised to visit the MyCiTi website at www.myciti.org.za for more information about the timetable changes, or to phone the Transport Information Centre on 0800 65 64 63.
By Atlantic Sun
https://www.atlanticsun.co.za/news/people-urged-to-use-public-transport-12400528
No comments: 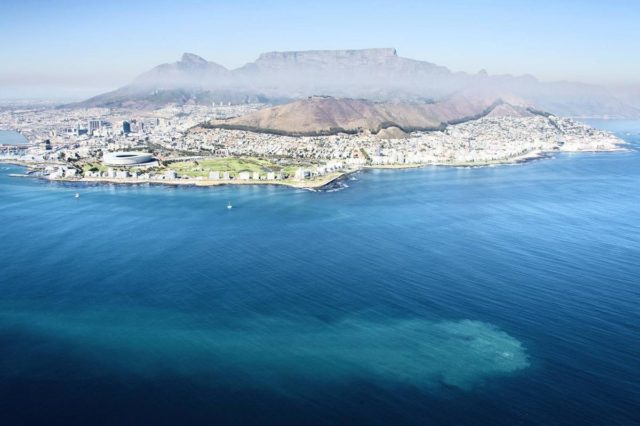 By
MATTHEW HIRSCH
https://www.atlanticsun.co.za/news/mixed-views-on-sea-report-12297335
No comments:

Water solutions should be discussed

Byron Herbert, Camps Bay and Clifton Residents’ and Ratepayer’s Association
In making these statements, Ms Limberg, as a City of Cape Town employee, appears to not have all the facts at her disposal, including surprisingly the results of her own marine biologist who she denied quoted his own findings of high levels of pharmaceutical bioaccumulation in the mussels near the Mouille Point Marine Sewage Outfall Point (MOP).
The group of professors from UWC, UCT and Stellenbosch who have been advising CBCRA, have done an intensive study of chemicals and pharmaceuticals found in Granger Bay, and interestingly enough just published their scientific findings in the November edition of the South African Journal of Science, which supplies undisputed evidence of the chemical and pharmaceutical concerns.
It would therefore be highly unprofessional and morally incorrect for CBCRA, knowing the severity of these public health concerns, not to make the general public aware of the potential health risks associated with desalinating from Granger Bay.
From what we are being told, the Council for Scientific and Industrial Research (CSIR) report is a collaboration of the City of Cape Town taking and testing samples, and the CSIR reporting on the results as furnished to them by the City of Cape Town, rather than the CSIR doing the entire process themselves.
This is therefore not only questionable from an independent study perspective, but we are told the report is indeed only a “snapshot” of a much larger problem.
In addition, this report was completed purely for the requirements of a new permit application to discharge sewage into the sea, via the MOP and it therefore it is not nearly sufficient enough to draw conclusions for the long term health risks associated with desalination from this area.
The concern remains that under the banner “Emergency Relief, no Environmental Impact Assessment (EIA) is required, and as such in Ms Limberg’s words “there is no acute risk” to consumers (ie Immediate risk eg. food poisoning ).
However, what is not being commented on is the chronic risk (ie long-term risk, eg cancer) associated with bioaccumulation that the folk digesting water containing trace amounts of chemicals and pharmaceuticals would be potentially exposed to.
The elephant in the room that is yet to be understood, is what the additional impact of the highly toxic waste created from desalination known as brine will be.
We are told the brine is going to be pumped back through the same MOP, and thereby create a bizarre cyclical marine environment, of a potentially ever – increasing toxicity, from which water is being drawn for immediate pumping into our drinking water supply network.
Much is being said about this particular concern, and it would be refreshing if the City of Cape Town would agree to engage in an open professional forum to sit around the table to brainstorm problems and find sustainable solutions together.
In the meantime we can be thankful that our media has understood the severity of the concerns, and is sharing it with the public at large.

By letter to the editor
https://www.atlanticsun.co.za/news/water-solutions-should-be-discussed-12297337
No comments: