Have your say in determining the City's priorities 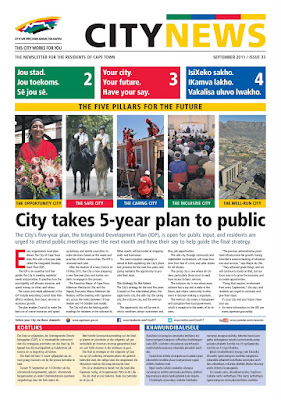 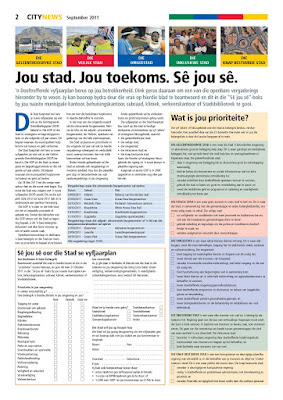 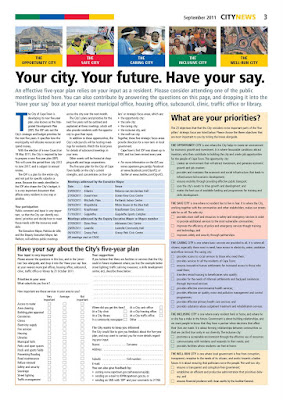 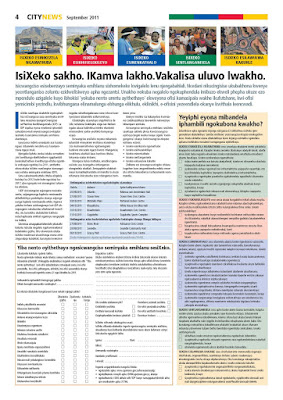 Good day
The City of Cape Town is developing its new five-year plan, also known as the Integrated Development Plan(IDP). The IDP sets out the City's strategic and budget priorities for the next five years. It specifies how the municipality will allocate resources and spend money.
The attached edition of City News explains this process and affords you the opportunity to have your say in determining the City's priorities.
Kind regards / Vriendelike groete/ Ngombulelo omkhulu
Marius Coetsee
Manager: Good Hope Sub-council (16)
11th floor, 44 Wale Street
CITY OF CAPE TOWN
Tel 021 487-2055
Fax 021 487-2208
e-mail: marius.coetsee@capetown.gov.za
"Sub-councils: Here to serve you well"
No comments:

The problem with water drainage on Geneva Drive, close to the Sedgemoor link in Camps Bay, has existed for many years. The City has responded promptly to our request on behalf of Resident Angie Dionysopolous for resolution to the ongoing water drainage problem which worsens in winter making this corner very dangerous. Our thanks to the City and all involved. See photos of serious solution work in process here: 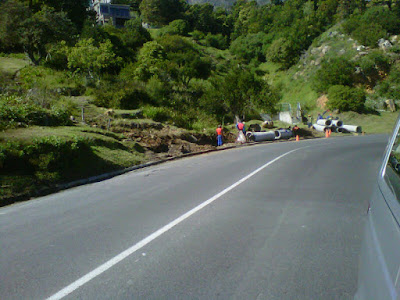 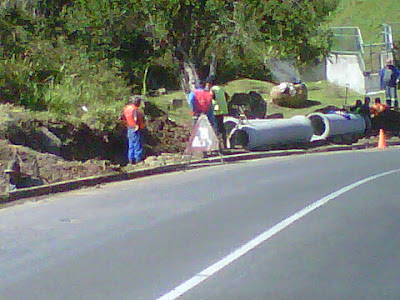 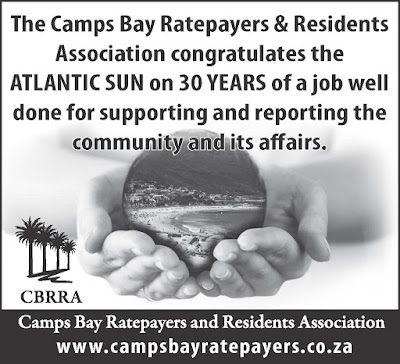 Cellphone masts on top of agenda

Published in the Atlantic Sun on 8 Sep 2011
The vexed question of cell masts – described as "invasive and potentially dangerous installations" – was dealt with at the special meeting of the Good Hope Sub Council 16 held in Hout Bay on Thursday August 25. On this occasion the decision went the the "greens". Read more ‹‹here››
Click on the article below to enlarge:

Published in the Atlantic Sun 8 Sept 2011
Some Camps Bay residents hope a five-star "party house" will be blocked from continuing to cause noise and parking hassles. Anton Bredell, MEC for Local Government, Environmental Affairs and Development Planning will make a decision about whether the residential premises in Fulham Road can be used for business. Residents lodged 34 objections with the City of Cape Town after MA Smith, a town and regional planner, applied for the removal of the title deed restrictions for the property. ‹‹read more››
Click on the article to enlarge: 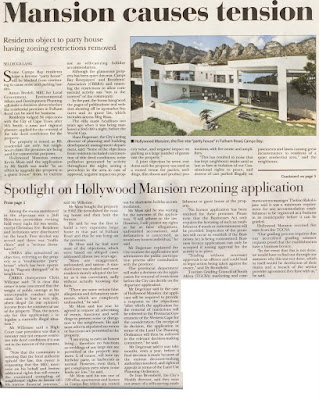 It was agreed to leave the ward forum representation until later when advertised.

Published in the Atlantic Sun 1 Sept 2011
Sandy van Hoogstraten is a member of the CBRRA Manco in our Environmental portfolio.
Click on the article to enlarge. 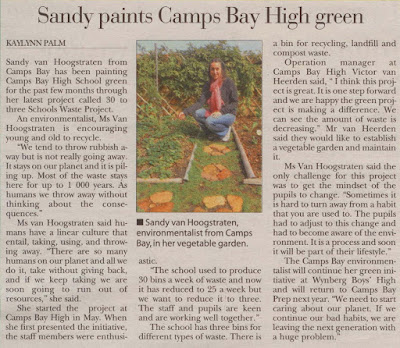 Published in the Atlantic Sun 30th Anniversary edition 1 Sept 2011
Established at the beginning of the twentieth century, Camps Bay and environs developed very slowly from being a holiday camping resort located around Central Drive to a sleepy dormitory suburb which, by the 1980s, was in a bedraggled and disco-ordinated state through which most people drove to somewhere else. In peoples’ mind, the wind blew too hard and the water was far too cold! Up to 1980, very few properties in Camps Bay changed hands for over R 100 000.
In the early 1980s, the huge and then legal Sonnekus apartment block was constructed to residents’ absolute horror when they discovered that the whole of the Camps Bay beachfront area permitted seven storeys buildings and we could have another Sea Point on our doorstep unless something was done about this.
It took the Camps Bay Ratepayers and Residents Association (CBRRA) three years to get the City Council to amend its planning zoning scheme to reduce the maximum heights of buildings in Camps Bay to not exceeding 10 metres above ground level to eaves and lower in Bakoven.
However, at that time, a Developer had already submitted an application to the City Council to demolish the Rotunda Hotel and the very historic adjacent Rotunda ballroom erected in 1904 as a concert hall and tea room and to erect a massive new apartment block over the whole site. At this stage CBRRA took matters into it own hands and, after considerable discussions with residents, persuaded the City Council to:
1. Expropriate the Rotunda site and buildings,
2. Demolish the nearby ugly and seldom-used Civic Centre
3. Relocate the Caltex Garage away from the intersection at the bottom of Camps Bay Drive with Victoria Road to enable traffic lights to be installed there.
4. Consolidate the existing land the Council owned in the vicinity and invite a public proposal call for designs and cash offers for the whole site which now embraced all the above. CBRRA wrote the specification for the tenders and was co-opted onto the judging committee to help the Council choose the winning proposal.
The current Bay Hotel and the shopping complex was the result and the tender was won by Developers Equikor Ltd who sold the shopping complex to the Pretoria Municipal Pension Fund who added to it as did the Solomon Brothers who subsequently purchased it while the Bay Hotel was purchased by Maree Brink. At the same time CBRRA persuaded the Council to double the area of the soccer fields by altering the one small east – west field into two north-south fields.
The sum total of all the above was that a completely modernised central business district was created for Camps Bay and the previously quiet village has since then expanded its population dramatically and property values have sky – rocketed to a degree that the whole area stretching from Clifton to Bakoven now contains arguably the most coveted residential real estate properties in the country, with their unequalled beaches the jewels in the crown of Cape Town’s tourist industry.
CBRRA’s most sincere aim is to ensure that the rebuilding and densification of the residential component o these beautiful suburbs over the forthcoming years will be executed in a sensitive manner which will fit in with the existing built environment to the benefit of existing and new owners alike.
Camps Bay Ratepayers and Residents Association.
No comments:

Long before F. W. De Klerk heralded the transformation of South Africa in 1990 by freeing Nelson Mandela and unbanning the ANC, the Camps Bay Ratepayers and Residents Association (CBRRA), after a very hectic public meeting, decided in the early 1980s that the continuing banning of people of colour from beaches and Camps Bay’s beaches in particular was totally unacceptable.

It approached the then Provincial Administrator Gene Louw and Nationalist Party Minster Piet Koornhof in the early 1980s to permit Camps Bay to open its beaches to all. This permission was cautiously given on condition that CBRRA did not make it officially known.

When the public at large learned that this beach was opened to all, the first December holiday season was absolutely chaotic, with huge crowds, mass misbehaviour (braais were permitted on the beach in those days) overcrowding and general intolerance.

At the end of the season the then government insisted that a 2 metre high fence be erected to enclose half of the main beachfront with a R2 entry fee! The result of this absurd situation resulted in the whole of the previous year’s crowd squeezing into the free half of the beach and hardly any bathers at all using the pay section (see photograph)

At the end of the second holiday season, CBRRA persuaded the government to remove the fence, open the beach and ban braais to reduce misbehaviour.

Camps Bay main beach was the first beach in South Africa to be opened to all races in the modern era, when apartheid was at its height. Within two years, long before the government disappeared, and in spite of the relevant restrictive apartheid laws still being in place, every beach in South Africa was opened to all races, thus helping to starting the reform impetus which led to F.W De Klerk being able to do what he did.

The fence? To this day it exists in the vicinity of the Edgar Lipsett Oval and Maidens Cove, a monument to the splendid example of racial tolerance initiated by Camps Bay. 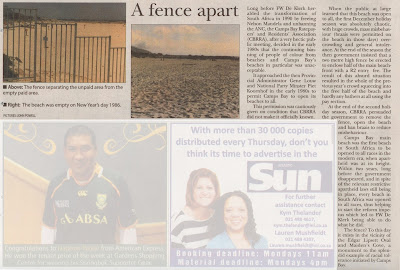