With the changeover from a paper-based ticketing system to the first phase of the myconnect card achieved, construction continuing apace for new routes (albeit with some traffic disruption) and the arrival of new smaller buses soon, it is going to be a momentous year ahead for Cape Town’s new public transport system. 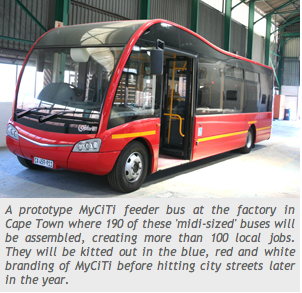 Within the City of Cape Town, Mayoral Committee Member for Transport, Roads and Stormwater, Councillor Brett Herron, is providing leadership to the project.
Former Executive Director responsible for Transport, Roads and Major Projects, Mike Marsden, is the new Deputy City Manager and recently appointed Melissa Whitehead is the Executive Director of the newly constituted team for Transport, Roads and Stormwater.
With 13 years of local government experience (six of those at senior management level), she has worked in various transport-related positions in the City of Johannesburg. Over the last ten years she has been project manager and strategic advisor in transportation management and integrated public transport management. She holds a BSc in Town and Regional Planning as well as a Masters in Environmental Planning for Developing Countries.
News just in is that Cape Town has been recognised with an honourable mention at the 2012 Sustainable Transport Awards in Washington. Hosted by the Institute for Transportation and Development Policy (ITDP), the awards honour cities that have developed truly sustainable public transport systems. Cape Town was nominated with 16 other cities. San Francisco and Medellin were the joint winners.
Accepting the award, Councillor Brett Herron said Cape Town was still ‘in the infancy of its transportation transformation, or revolution, and we have a long way to go before we achieve our objective of providing an equitable, safe, efficient, affordable, quality public transport service for all.’ He said the award was ‘a massive vote of confidence in our pursuit of this objective and is enormously encouraging.’
‘A quality, integrated public transport system is essential to providing both social and economic inclusion and to achieving our objectives, and delivering on our mandate, which is to build a city that provides opportunity, is safe, is caring, is inclusive and is well-run,’ he said.
Switch to smart travelling
The change from a paper-based ticketing system to the universal use of the myconnect card has generally been well received by users of the MyCiTi system.
By the time the last final paper tickets were accepted on 28 January, over 10 000 cards had been sold, despite some unhappiness over the 2.5% charge on value loaded onto the card.
The card is an easy and efficient way to ensure that a large number of people can access the system quickly and conveniently.
It avoids the need for carrying of cash and paper tickets, and allows commuters to budget around their monthly or weekly trips in a single transaction. The card also allows people to load money onto their cards for a week or a month at a time, making budgeting for your travel needs much easier. This is the first step of a gradual implementation to be rolled out over the years and further phases will come into effect in mid-2012, when specific travel products and other uses for the cards are introduced.
Construction in Tableview area
As part of the roll out of permanent feeder routes and the extension of routes, construction has started on the Table View station in Blaauwberg Road.
This is necessary to cater for the extension of routes up the West Coast, to Atlantis and areas like Dunoon, and the introduction of smaller nine-metre buses to replace the 12-metre buses currently operating on feeder routes in the area. Construction is expected to take four to six months. Directional signage will assist road users and pedestrians. Further safety measures include placing a concrete barrier between the new walkway and the bus lane still in operation, and a fence between the walkway and the construction area.
Construction in and around the City
Work is also going full steam ahead on the construction of new feeder stations at Civic Centre and Gardens, under the bridge in Mill Street.
Residents will also notice work being done on pavements to construct the different types of bus stops and shelters along eight new routes around the City Bowl, including Woodstock and Salt River, along Sea Point, to Camps Bay and Hout Bay. These new routes are expected to be up and running towards the end of 2012.
MyCiti Tip of the Month
Make the most of your myconnect card. Avoid daily queues by loading enough money in advance. Also pay attention to the low-balance indicator and top up your card when necessary.
For more information
Transport Information Centre (toll-free 24/7) 0800 65 64 63www.capetown.gov.za/myciti
Follow MyCiTi on Facebook or Twitter