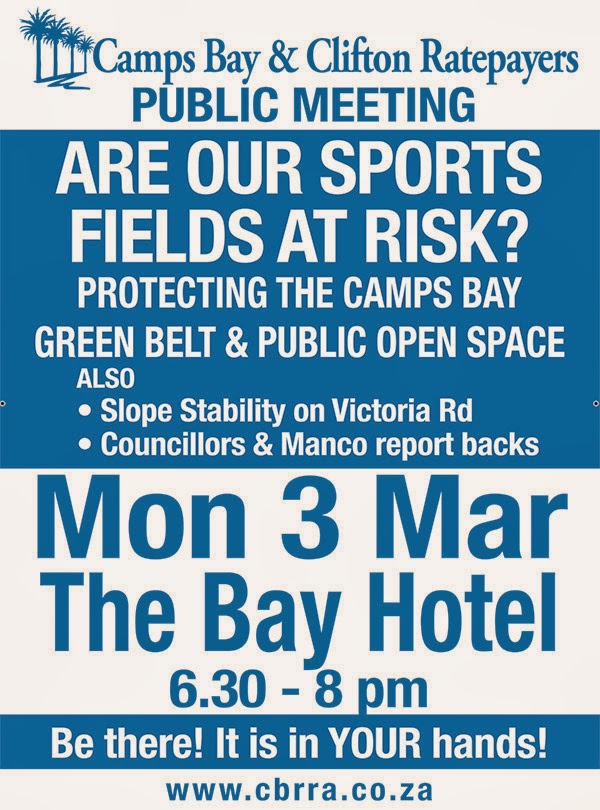 Be There! It is in Your Hands!

Declaration of the street block bound by Strand, Buitengracht, Bree and Waterkant Streets

Many of you may not know about the CBRRA or what it does.  The CBRRA has been around for many years.  The Executive Committee offers their time and expertise free of charge for the mutual benefit of ALL owners and residents of Camps Bay.  It is through the tireless work of Exco Members over many years that Camps Bay is what it is today – arguably the most desirable place to live in South Africa.  You should consider the CBRRA as your community friend looking after your interests in the Camps Bay community.

Some of the main objectives of the CBRRA are:


We would like to invite you all to join CBRRA and assist Exco in making the Camps Bay community even better.  It is only with the support of the community that we are able to achieve our objectives and protect your interests.

If you would like to join, please can you e-mail us and we would be pleased to welcome you.  All we ask for is a nominal contribution of R300 per annum.  Alternatively, you can make a combined contribution of R500 for 2014 and 2015.  This can be paid either in cash at Herbert Properties office or alternatively by means of an EFT.  The bank details are as follows:

For those of you who are already Members, we would like to thank you.  If you could forward this post to anyone you may know that would like to join, we would be most grateful.
No comments:

The Future of Camps Bay and Clifton in Your Hands 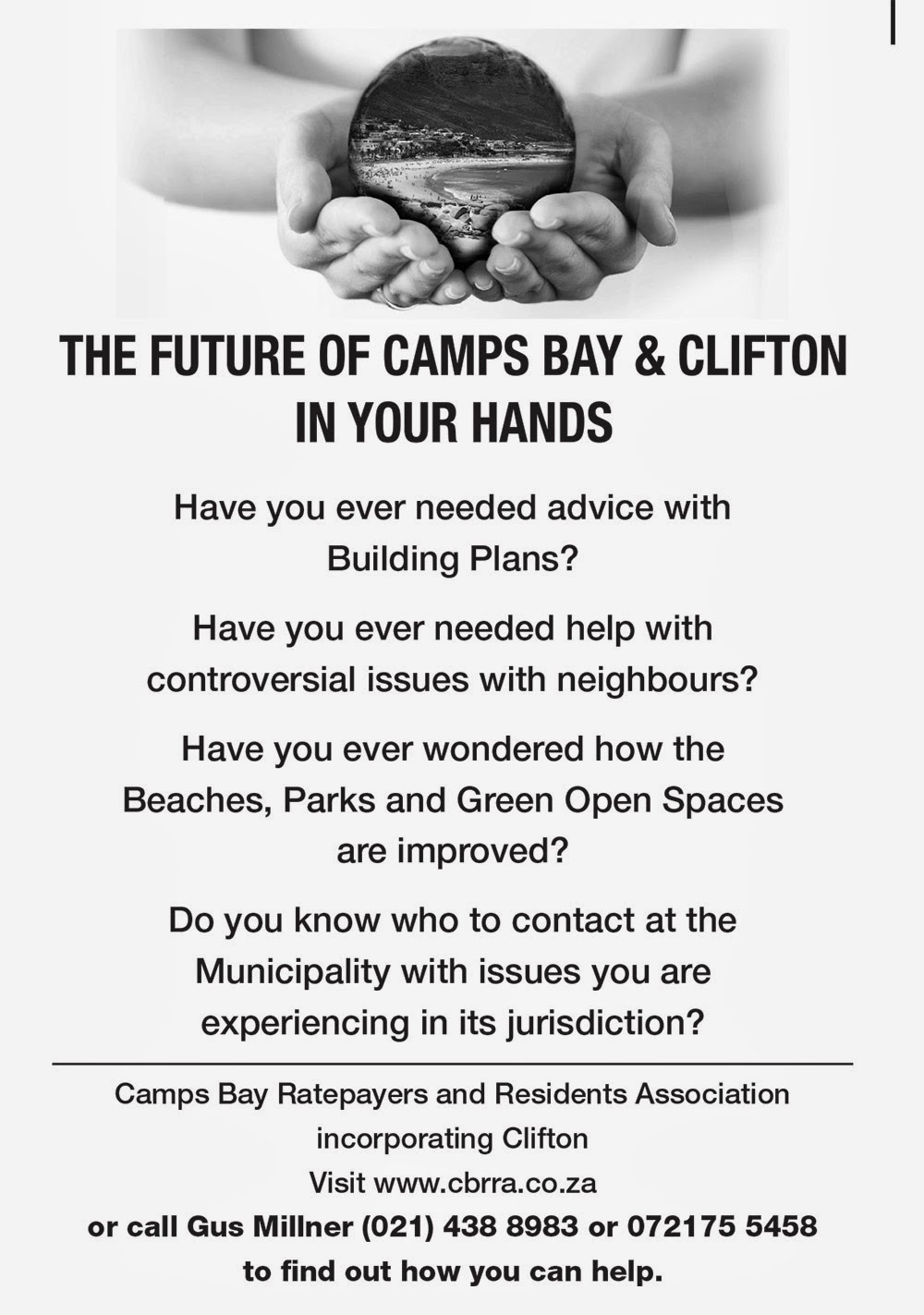 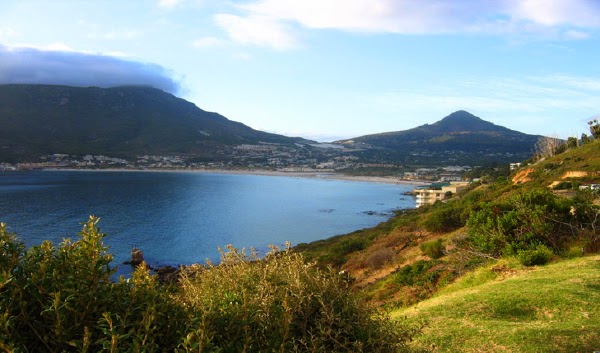 Think Twice is the City of Cape Town’s free door-to-door municipal recycling collection service.
This proven method has been operating successfully in The City of Cape Town for over five years.
In previous pilot phases, many lessons have been learnt which have been put to use as the
Think Twice system gains in efficiency and popularity.


The free service will collect your recyclable materials each week on the same day as your refuse removal.

Follow these simple steps to get into the recycling routine.

One:
Collect all your 'dry` recyclables (paper, bottles, tins, plastic containers) in the clear plastic bag you will regularly receive

Two:
Each week on your refuse removal day, place your clear bag of recyclables on top of your black bag inside the wheelie-bin.

Three:
Waste Control will remove your recyclables first and leave a new clear bag for you to start collecting the next week's recyclables.
Please help by remembering to:


Other wet and non-recyclable waste in your wheelie-bin goes into the refuse truck in the usual way before being compacted and disposed of at the landfill site.

Where do your recyclables go?
Your bag of recyclables is collected and loaded into a separate vehicle. From there it is transported to a specially built recycling facility for separating and made ready for later reprocessing into new materials. 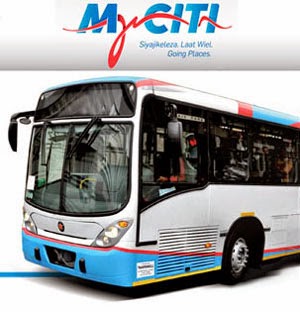 MyCiTi services launch on Saturday, 15 February, linking central Cape Town with Hout Bay via Main Road in Sea Point. Commuters must get their myconnect cards to use these new services.

Both routes run from Civic Centre station in the city centre along Main Road through Green Point and Sea Point, Clifton and Camps Bay and on to Llandudno and Hout Bay. The routes split in Hout Bay with one route running via Hangberg(108) and the other via Imizamo Yethu(109).

Passengers travelling to Camps Bay, the upper city bowl and central city area will also have the choice of transferring at two beachfront stops in Camps Bay to the MyCiTi routes that travel over Kloof Nek (106 and 107).

With the launch of the new services, Golden Arrow bus services and minibus taxis currently operating along these routes will be withdrawn. This means that users of these public transport modes need to get ready to use MyCiTi by getting a myconnect card loaded with enough money to travel.
Get your FREE myconnect card

Everyone four years and older needs their own myconnect card loaded with value to travel with MyCiTi. Get your card for R25 from MyCiTi stations and participating retailers.

MyCiTi will also be holding free myconnect card promotions from 1 February 2014 at the Hout Bay public library where you can get a free card loaded with 30 Mover points for travel. You only pay R30 for the points and save on the R25 card cost.

Anyone can get a free card. All you need is R30 in cash and to present proof of identity (ID book, driver's licence, passport or birth certificate). Parents of caregivers applying on behalf of children under 18 must sign on their behalf, and the child must be present.

Passengers can also load Mover packages at these libraries.

The City of Cape Town won't publish a municipal valuations roll this year, so the results of the previous roll, published in February last year, will apply to all properties until at least February 2015.

Municipalities are only required to publish a new roll every four years, so it's likely these values will apply until early 2016.

The exception to this is properties that have substantially changed during this period or are deemed to have been incorrectly valued to a large degree. To update information, a supplementary roll is published every year detailing properties that have had their valuations amended.

'Most homes won't be revalued until the next general roll, but it's good to be aware in case a change does come,' said Claude McKirby, southern suburbs principal for Lew Geffen Sotheby's International Realty.

'The change in question is your rates, which are calculated according to the municipality's valuation of your home, minus a R200 000 rebate. You should be aware of the value the city has put on your property, as an incorrect value could result in rates being higher than they should be.'

'Over the years, the system has improved and most valuations now are quite accurate, but with 800 000 properties to value, there are bound to be errors,' said Steve Thomas, False Bay area manager for Lew Geffen Sotheby's International Realty.

'There is an objection system for owners who think their properties have been overvalued; however this is only available for a certain time after the roll has been published.

'Each supplementary roll also opens a new window for objection, but only to properties that have had their values changed. In general, the valuations are below what your home would fetch on the open market and shouldn't really play a role in the sale process,' said Thomas.

'Nevertheless , buyers should be aware of why their rates are as much as they are and, if necessary, be prepared to lodge objections when the opportunity arises.

'If you are carrying out extensive work on your property, you need to factor in the likely rise in rates in the next supplementary roll,' said McKirby.

Check legality of property structures before you buy

MONDAY FEB 03, 2014
Check legality of property structures before you buy

A latent defect is one that is not visible or discoverable upon an inspection of the property.

In the matter of Odendaal v Ferraris (2009) (4) SA 313 (SCA), the court was called upon to decide this point. The facts, briefly stated, were the following: The buyer of certain immovable property discovered the carport and outbuilding had not been erected in accordance with approved building plans, and therefore did not comply with section 4 of the National Building Regulations and Building Standards Act (Act 103 of 1977).

Consequently, the buyer instructed his bank not to proceed with the transfer and bond registration, which the seller regarded as a repudiation of the sale agreement, entitling the seller to cancel the agreement.

The seller duly cancelled the sale agreement and instituted eviction proceedings against the buyer, who had already taken occupation of the property.

The buyer resisted the eviction proceedings on the ground that the property was latently defective and as a result he was not in breach of contract.

The seller's response was that the voetstoots clause in the sale agreement protected her against a claim by the buyer, based on the lack of the said statutory authorisations.

The court held that the absence of statutory approval constituted a latent defect, which interfered with the ordinary use of the property. The fact that the carport and the outbuilding also contravened building regulations did not change their characterisation as a latent defect.

According to the court, a voetstoots clause ordinarily covers the absence of statutory authorisations and protects the seller against claims based on such latent defects.

More recently, in the matter of Haviside v Heydricks and Another (2014) (1) SA 235 (KZP), the KwaZulu-Natal High Court was faced with a similar question.

A double garage erected on the property constituted an illegal structure as there were no building plans approved by the municipality for the garage, nor did it meet the required standards in terms of building regulations.

The court confirmed the principle established in Odendaal v Ferraris that the absence of statutory approval constituted a latent defect and that the voetstoots clause ordinarily covered such defects.

It was important to appreciate that a voetstoots clause does not provide absolute protection to a seller seeking to avoid liability for latent defects. It was trite that if a buyer wished to avoid the consequences of a voetstoots sale, the onus was on him to show on a balance of probabilities the following:


Notably, case law has shown that in the context of a voetstoots sale, buyers found it difficult to prove the above requirements for a successful claim in respect of latent defects. The evidence of a suitably qualified expert was often required to draw an inference that the seller was aware of the latent defect, and deliberately concealed the defect with the intention to defraud the buyer.

In many instances, buyers had neglected to plead and prove the element of fraud, relying solely on the seller's apparent knowledge and failure to disclose.

Buyers should take heed of the judgments referred to above and the potential disastrous consequences of buying a property containing illegal structures. Where illegal structures exist, the municipality could apply for a demolition order, which if granted would result in the illegal structures being reduced to rubble, with the attendant reduction in value of the property.

Prospective buyers could either satisfy themselves before entering into a sale agreement that the improvements on the property were built in accordance with approved plans and according to municipal regulations (often with the help of a qualified expert such as an architect), or insert an appropriate warranty by the seller to this effect.

Another option was to delete or omit the voetstoots clause in its entirety. Where time does not permit a proper investigation before signing the agreement, a suitably worded suspensive condition could be inserted into the agreement, providing the buyer with a period of time within which to satisfy himself as to the legality of the improvements and to notify the seller in writing of his approval.

Ideally, the seller should be obliged to furnish the buyer with a copy of the approved plans as soon as possible after signing the sale agreement. If the buyer neglected to ascertain the status of the improvements before transfer, he would either have to accept the property with the prevailing defect or enter into costly (and often protracted) litigation in an attempt to enforce his rights.