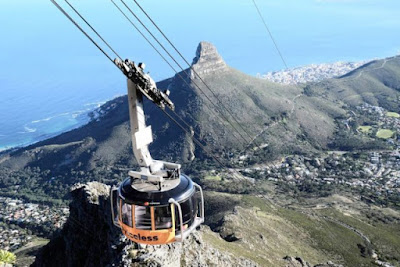 The Bo-Kaap Civic and Ratepayers’ Association (BKCRA) banned tourists from the area last week, ahead of President Cyril Ramaphosa’s announcement on Monday night of a national lockdown.

Chairperson Osman Shaboodien said as a tourist destination, Bo-Kaap’s residents were more prone than other areas to get into contact with tourists from high-risk countries.

“We, therefore, place the tourism industry and government on notice that Bo-Kaap will be on lockdown and no tourists will be allowed into our area. This is for their health and the health of the Bo-Kaap community,” he said.

Mr Shaboodien said it would have been a challenge to enforce and they had appealed to the community and tourism industry for support.

“We can easily ask the group when they come in here, but we can’t do that to individuals coming in and staying in our B&Bs. We ask people to adhere and respect our wishes until this dies down. Eventually, things will go back to normal,” he said.

The Table Mountain Aerial Cableway Company (TMACC) closed to all visitors on March 18.

“As the leading attraction in Africa and the Indian Ocean, we believe that it is our duty to act responsibly as a tourism operator under these extreme circumstances.

As the number of confirmed cases continue to rise, we will continue to take the necessary precautions to mitigate the spread of the virus,” said TMACC managing director, Wahida Parker.

Meanwhile, two vessels in the Port of Cape Town were held off port limits last week after a crew member onboard one of the vessels began to exhibit symptoms of Covid-19.

It was later established he had been on a flight with a fellow crew member and six passengers who went on to board a cruise vessel at the port.

This was the first suspected case of Covid-19 in a South African sea-port. The two crew members had flown into the country from Istanbul, Turkey, on March 9. Only one of the two showed signs of being ill, however both have been placed into isolation onboard the general cargo vessel, the unfortunately named MV Corona.

Upon arrival on Monday, March 16, both members were evacuated by airforce helicopters for the suspected sick crew member to be transported to hospital. They later both tested negative.

In a second ship, the MV. AidAmira ship, which had been operating between Port of Cape Town and Namibia (Walvis Bay) this cruise season, six passengers were quarantined after Transnet National Ports Authority (TNPA) was informed by Port Health Cape Town that they had been on the same flight as the two MV Corona crew members. The members were evacuated and taken to the hospital for testing.

They all tested negative for Covid-19.

Transport minister Fikile Mbalula announced the results and has since issued a ban on leisure vessels entering the country’s seaports and prohibited cargo vessels from changing crews once they dock as part of measures to contain the spread of Covid-19.

At a press conference at the Cape Town harbour last week, Mr Mbalula announced new regulations that would prohibit the embarkation and disembarkation of passengers at eight sea ports.

In terms of these regulations, he said, no passenger vessels will be allowed in our ports. In essence, there is a total ban on cruise ships.

“This affects all leisure travellers,” he said.

By SINAZO MKOKO AND STAFF REPORTER