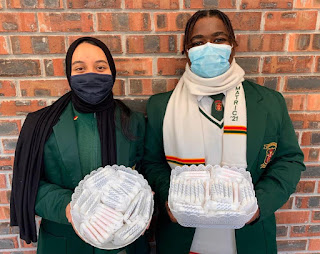 From left are Nishaat Williams and Michael Gulston from Camps Bay High School’s RCL with the sanitary products.

Camps Bay High School’s Representative Council of Learners (RCL) has put an end to period poverty at the school, at least for the next year.

The project started with members of the RCL buying sanitary pads and tampons and placing them in all the girls’ toilets on a trial basis to measure usage and to see whether the privilege would be abused or not.

“Earlier this year, the newly elected Camps Bay High School RCL decided to try an experiment in the female and gender neutral bathrooms at school. The team placed baskets with free sanitary products available to all those in need. This was incredibly well received by the learners at our school and based on this, they launched an internal funding drive with parents and guardians of learners at the school so that the project could be sustained in the long term,” said Camps Bay High School’s Educator-in-Charge of RCL, Michelle Janse van Rensburg,

“I’ve always questioned why sanitary products are not supplied free-of-charge in all female and gender neutral bathrooms at school. Menstruation is not a choice and period poverty within our school community is definitely a reality. Camps Bay High School is a truly diverse school with learners coming from a variety of backgrounds. Sometimes learners may also come to school unprepared. Having sanitary products available for free in the bathrooms avoids all sorts of embarrassment and judgement,” said Michael Gulston, Grade 12 member of the RCL.

Ms Janse van Rensburg said the RCL raised over R17 000 in a month to buy the products in bulk and ensure there is never a shortage.

The school has also invested in sanitary product dispensers, which are now on the walls of the toilets.

“We would like to thank all the parents and guardians who contributed to this project to ensure that we can end period poverty, at least at Camps Bay High School.”

Michael hopes their action will inspire other schools to start their own initiatives and challenged other RCLs to make an effort to end period poverty in their schools.